IIMCB researchers from the Laboratory of Cell Biology uncover a synthetic lethality between VPS4A and VPS4B paralogs, and propose the VPS4A activity as a promising target for therapy of patients with VPS4B-deficient tumors.

Personalized medicine can improve the outcome of cancer patients by offering therapies tailored to the genome of an individual. To develop such therapies, novel targets must be identified for selective killing of genetically diverse tumor cells. In a study published in EMBO Molecular Medicine, Ewelina Szymańska, Marta Miączyńska and their co-workers from the Laboratory of Cell Biology of IIMCB report the identification of a novel druggable candidate for personalized therapy of patients with VPS4B-deficient tumors, such as colorectal cancer (CRC). The study was performed with help of researchers and clinicians from the Maria Skłodowska-Curie Institute-Oncology Centre and the Nencki Institute.

Genomic rearrangements (for example loss or amplification of a part of chromosome) targeting the key genes that control cell growth or death are a driving force for transition of a normal cell into a cancer one. Paradoxically, genomic rearrangements can also expose an “Achilles’ heel” in cancer cells. This happens when the deleted part of a chromosome encompasses a passenger gene X that under healthy conditions cooperates with another gene Y to support the cell's functions. Then, the single remaining gene Y becomes an "Achilles’ heel" for the cancer cell since its perturbation will cause cell death. This phenomenon is called synthetic lethality and represents a promising approach for personalized oncology. However, a challenge remains in identifying target genes mutated throughout the tumor and not in normal vital tissues.

The Miączyńska’s lab has been long studying the mechanisms linking endocytosis and signal transduction in health and disease, including cancer. In their newest work the IIMCB scientists focused on two ubiquitously expressed human paralogs VPS4A and VPS4B. The VPS4 proteins are ATPases involved in the remodeling of biological membranes that takes place during endocytosis but also other intracellular processes like cytokinesis or exosome release. Thus they are of a key importance for cellular homeostasis and as enzymes represent a convenient drug target.

By first exploring publicly available The Cancer Genome Atlas, the scientists found that in many cancer types, notably in CRC, the VPS4B gene is frequently lost along with a larger part of chromosome 18. Then, the clinicians from the Maria Skłodowska-Curie Institute-Oncology Centre confirmed lower levels of VPS4B protein in tumor samples from CRC patients in comparison to healthy colon tissue.

Using cancer cell lines grown in vitro and in vivo, the researchers revealed that VPS4A and VPS4B paralogs were synthetically lethal, i.e. their simultaneous depletion (VPS4A+B) caused cell death, while loss of any single paralog was well tolerated. This demonstrates that VPS4B-deficient cancers cells are selectively vulnerable to the perturbation of VPS4A activity. Importantly, the scientists also discovered that dying cells lacking both VPS4 proteins induce a strong inflammatory response that in an organism could evoke an anti-tumor reaction, supporting a positive therapeutic outcome.

In summary, this collaborative research establishes a foundation for future work aiming to develop a VPS4 inhibitor as a putative therapeutic for precision therapy of patients with VPS4B-deficient cancers, such as CRC. 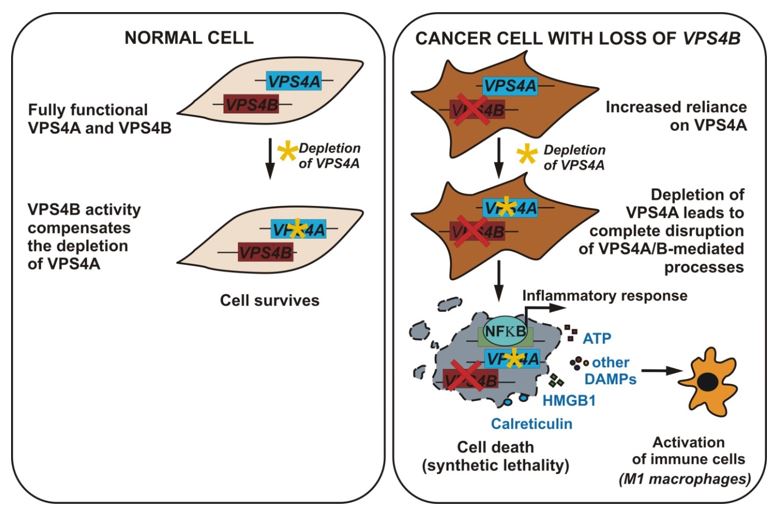 Left panel, in normal cells, both VPS4A and VPS4B act redundantly in several essential intracellular processes. So, a single depletion of any VPS4 paralog (e.g. VPS4A) is tolerated, as unperturbed expression of the other paralog alone (e.g. VPS4B) suffices to substitute for its downregulated counterpart. Right panel, cells that have lost VPS4B expression, e.g. due to oncogenic genome rearrangements, rely exclusively on VPS4A activity. So, inactivation of VPS4A in these cells leads to synthetic lethality that is accompanied by strong induction of an inflammatory response and release of immunogenic DAMPs. Immunomodulatory molecules released by dying VPS4A+B-deficient cancer cells can elicit paracrine effects on primary immune cells, e.g. reprogramming of macrophages toward the M1 anti-tumor phenotype.