World Autism Awareness Day is celebrated on 2 April. Its purpose is to raise public awareness and promote knowledge about this disorder, which has been recognized by the United Nations as one of the world's most serious health problems along with cancer, diabetes and AIDS. All the time, in many scientific centers all over the world, research is being conducted on the etiology of autism, since so far scientists have not managed to unambiguously determine the causes of its occurrence, and thus to develop effective therapy and treatment.

Autism spectrum disorders are a group of neurodevelopmental disorders that appear in early childhood and are characterized by problems in communication and social interaction. It is also common for those affected by ASD to have repetitive patterns of behavior and a strong attachment to daily routines. Often, deviation from the latter, or exposure to unexpected or overly intense stimuli, can cause great discomfort, leading to panic attacks and aggression. As a result, social functioning is extremely challenging for both children and adults with ASD. Sometimes it is possible to overcome this challenge through hard and well-tailored work with the child and a supportive environment. The aetiology of ASD is very varied and individual conditions can vary greatly in the severity of their symptoms. One important cause of at least some of the conditions included in ASD is mutations in genes that determine, for example, the normal development of the nervous system or communication between nerve cells. So far, about 30 genes have been identified that increase the risk of ASD. Among them are the TSC1, TSC2, FMR1, or CNTNAP2 genes, in which mutations result in tuberous sclerosis, fragile X syndrome, or Pitt-Hopkins syndrome, respectively. Although the mutations that cause these conditions are known, scientists are still trying to understand how they lead to changes in the anatomy and function of the nervous system, which in turn translate into behavioral disorders. Among them are scientists at the International Institute of Molecular and Cellular Biology.

The team of the Laboratory of Molecular and Cellular Neurobiology, within the financial resources received from the National Science Centre, National Center for Research and Development, and European Union, in cooperation with partners from Polish (e.g., Medical Warsaw University, Children's Memorial Hospital, Epimarker consortium) and foreign (e.g., Epistop consortium) centers, develops novel cellular (e.g. IPSC cells, cortical organoids) and animal (zebrafish) models to study molecular, cellular and systemic effects of mutations in genes that increase the risk of autism, in particular TSC1 and TSC2. One of the most interesting models used by this team are zebrafish (D. rerio), with mutations in Tsc2, Fmr1 or Cntnap2 genes. 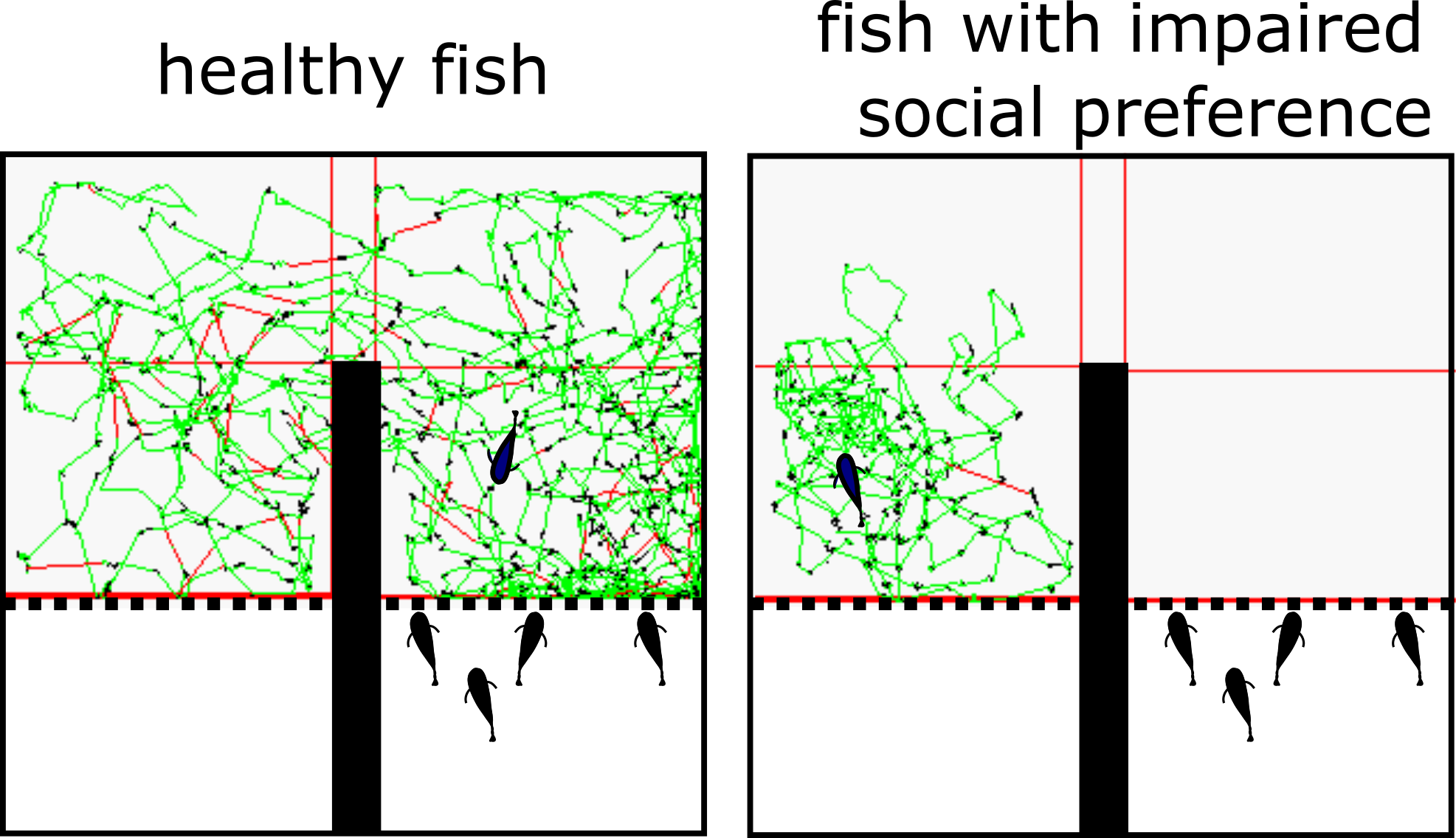 Fig.1. The aquarium fish, the zebrafish danio, can be used in autism research. Fish with mutations in genes that increase autism risk show less interest in other fish in the tank, which is interpreted as a sign of impaired social interaction. The picture shows the movement trajectories (green-red lines) of a "healthy" fish and a fish in which social preferences are disrupted.

It may seem that these small aquarium fish, quite distant in evolutionary terms from humans, cannot be a good model for human nervous system diseases. However, it turns out that zebrafish have 80% of genes, which mutations in humans result in genetic diseases. What's more, these fish are transparent and develop “externally”, which makes it easy to observe the development of the nervous system at stages that in mammals take place in the mother's body. Finally, the fish, due to the fact that they live in shoals, exhibit very complex social relationships. Interestingly, fish with mutations in genes that increase the risk of ASD show serious disturbances in these behaviors, such as a lack of desire to be with other members of the shoal. It is this type of behavior in laboratory animals, that is being used to model ASD. The team from the Laboratory of Molecular and Cellular Neurobiology is using a combination of automated analysis of fish behavior and comprehensive analysis of the development of brain connections to understand how disrupted molecular processes in individual brain cells translate into anatomical and behavioral changes in the pathogenesis of ASD.

Show solidarity with people with autism!