Parkinson’s Awareness Week starts on World Parkinson’s Day – April 11th and ends on Saturday 17th. Its purpose is to raise public awareness and promote knowledge about the disorder affecting millions of people worldwide, and to raise funds to support research and people affected. Unfortunately currently, there is no cure for Parkinson’s disease (PD) or a method at least to delay its progress, and only symptomatic treatments are available. More research is needed to develop better therapies and efficient drugs.

PD is a common neurodegenerative disorder resulting in both motor and non-motor symptoms. About half of people with PD suffer from anxiety or depression, which worsen other symptoms such as stiffness, tremor, and sleep problems. The pathological hallmark of PD is loss of dopaminergic neurons in the substantia nigra pars compacta. The etiology of PD involves multiple factors, including genetic and environmental ones. Only about 5% of patients have the inherited form of PD due to mutations in genes such as α-SNCA, ATP13A2, DJ-1, LRRK2, Parkin or PINK1. In different PD cases there is an apparent intracellular calcium ions dysregulation, e.g. loss of function of PINK1 gene leads to calcium ions mishandling. PINK1 is a serine-threonine kinase and is an activator of Parkin-mediated ubiquitylation. Together they work as a quality control to maintain a healthy pool of mitochondria. Mitochondria are vital for cellular physiology, e.g. for ATP generation, and mitochondrial calcium ion is a key player in cell functioning and survival. Aberration in mitochondrial calcium ions homeostasis plays, among several other factors, an important role for the neuronal loss in PD. Although the mutations that cause these conditions are known, it is not clear how they lead to the loss of dopaminergic neurons. 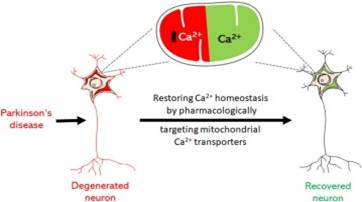