Researchers from the Laboratory of Cell Biology uncover cellular processes regulated by AXL, an attractive drug target for treatment of cancer and COVID-19 patients

Metastasis, the ability of cancer cells to spread from the primary tumor and invade distant secondary sites, makes cancer incurable. Despite much progress in oncology in the last decades, metastasis still causes approximately 90% of cancer-related deaths. Another important obstacle that leads to failure in cancer treatment is resistance to cancer therapy. Despite initial responses to cancer therapy, the vast majority of patients develop resistance within a few years. AXL is a receptor tyrosine kinase that is associated with both metastasis and cancer drug resistance. However, despite active development of AXL inhibitors for clinical use in oncology, astonishingly little is known about the intracellular mechanisms of AXL action. In a recent study published in the prestigious Proceedings of the National Academy of Sciences of the United States of America (PNAS), researchers from the Laboratory of Cell Biology report the identification of the first comprehensive AXL interactome and the cellular processes regulated by AXL that explain the involvement of this receptor in cancer progression and metastasis. The study was led by Dr. Daria Zdżalik-Bielecka in the group of Prof. Marta Miączyńska, with important contributions of talented early career scientists: a PhD student Agata Poświata and a Master’s student Kamila Kozik. It also involved a collaboration with Norwegian and Polish researchers from the Oslo University Hospital and the Nencki Institute of Experimental Biology, respectively.

AXL belongs to the TAM receptor subfamily (TYRO3, AXL, MER) and is activated upon binding of the GAS6 ligand. Overactivation of AXL has been correlated with invasive tumor cell phenotype, metastasis, drug resistance and poor prognosis for patients. In addition, several studies suggest that AXL is involved in the cellular entry of viruses such as Zika and SARS-CoV-2. For this reason AXL appears to be a promising target for the development of therapies also against COVID-19, further highlighting the need to better characterize the cellular processes regulated by this receptor.

The Laboratory of Cell Biology headed by Prof. Marta Miączyńska has been long studying the mechanisms linking endocytosis and signal transduction of receptor tyrosine kinases in health and disease, including cancer. In their newest work, the scientists from the Miączyńska’s lab identified the first interactome of AXL using proximity-dependent biotin identification (BioID) assay. Strikingly, the researchers discovered that AXL associates with a large number of proteins involved in actin dynamics. This finding paved the way for the discovery that GAS6-AXL signaling induced membrane ruffling, adhesion site remodeling and macropinocytosis that jointly triggered invasion of cancer cells grown as spheroids in Matrigel. Specifically, IIMCB researchers showed that AXL activation triggered peripheral membrane ruffles (PRs) and circular dorsal ruffles (CDRs). The latter were involved in focal adhesion turnover, an important process during 3D cancer cell migration. Both types of ruffles promoted macropinocytosis, an actin-driven form of endocytosis, which not only mediated internalization of GAS6-AXL complexes but also allowed cancer cells to proliferate under nutrient-poor conditions by compensatory uptake and feeding on extracellular albumin. Mechanistically, GAS6-induced actin-driven rearrangements required the activation of a lipid kinase PI3K and were dependent on AXL but not a related TAM receptor TYRO3. 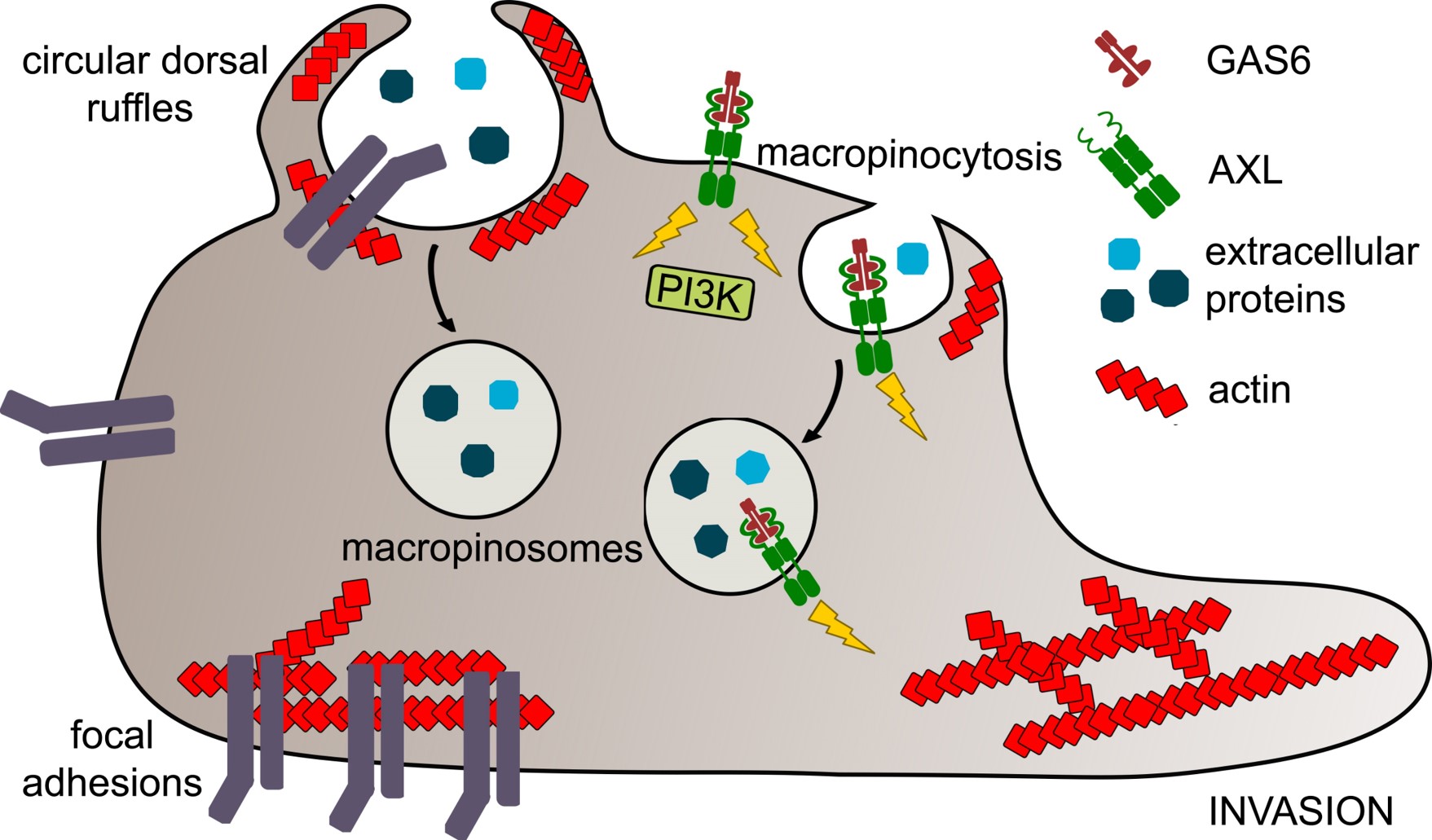 “Our study provides several novel findings with broad implications. First, the newly identified AXL interactors constitute a valuable and large resource for basic and translational research toward developing effective therapies for patients with advanced and metastatic cancers with overactivated AXL. Second, we demonstrated that GAS6 is a specific ligand for AXL and not for the TYRO3 receptor, solving long-standing discrepancies in the field of TAM receptor biology. Third, we found that the most important effect of activating the GAS6-AXL signaling pathway in the cell is the rearrangement of the actin cytoskeleton, which in turn alters membrane dynamics, substrate adhesion, cell motility and metabolism. Altogether, our study uncovers the molecular mechanisms of GAS6-AXL signaling as a pathway that promotes cancer cell invasion.” - explains Dr. Zdżalik-Bielecka, the initiator of the project and the first author of the published article.

The study was supported by the Sonata grant (2015/19/D/NZ3/03270) from the National Science Center to Dr. Daria Zdżalik-Bielecka.