Every part of our body is made up of cells - small units that work together. Although there are many different types of cells, they all have a few things in common. For example, all cells need proteins, which are the basic building blocks of complex cell structures. Proteins tend to break down or may wear out. Therefore, they must be recycled and replaced by new ones. Two main systems in the cell, the ubiquitin-proteasome system and autophagy, control half-life of proteins. Both have one thing in common, they recycle proteins inside the cell. Recently, a complementary system has been described that promotes removing damaged proteins and even organelles to the outside of the cell via large vesicles called exophers. This mechanism has only been described for neuronal cells of the model organism, Caenorhabditis elegans worm, and mouse heart cells and may represent an important but still poorly studied metabolic waste management system.

"We hypothesized that forming such large vesicles to remove only unwanted cellular components may not be their primary function" - said Dr. Wojciech Pokrzywa, one of the leaders of the research work. Indeed, the IIMCB scientists, together with collaborators from the IMol Institute and IBB PAN, discovered that worm muscle cells can also produce exophers. Surprisingly they found that developing embryos in the uterus triggers exopher formation (exopheresis) in muscle tissue. The vesicles transport muscle-synthesized yolk proteins and ultimately deliver them to newly formed oocytes. Consequently, the offspring of mothers with a high number of muscle-derived exophers grew faster.

"Using the most abundant tissue, muscle, to support nourishing the next generation through exophers is an example of a clever reproductive strategy," said dr Michał Turek, one of the leading authors of this research work previously a postdoc in the Prof. Agnieszka Chacinska group and currently a group leader in IBB.

In summary, this groundbreaking research demonstrates that an exopher formation is a bulky event in the muscle cells with a new role in reproduction that goes far beyond the expulsion of toxic proteins. “This process represents a transgenerational metabolic/resource management system that supports embryos in utero, providing means of adjusting to environmental conditions. Moreover, this study opens new horizons in research on the exophers as a poorly understood class of secretory vesicles” - said Prof. Agnieszka Chacińska, director of the IMol Institute, who is currently leading a group at the University of Warsaw.

“Interestingly, yolk proteins can be synthesized in the muscles of vertebrates. Hence, it is tempting to speculate that the role of muscular exopheresis in supporting progeny development is evolutionarily conserved” - hypothesize Michal Turek and Wojciech Pokrzywa.

Schematic representation of the results of the study. Muscles can expel cellular content via robust exophers. Exopher formation is sex-specific and fertility-dependent. Muscular exopheresis is a non-cell autonomous process regulated by in utero developing embryos. Insufficient food for embryos induces exopheresis. Exophers serve as transporters for muscle-generated yolk proteins that could be used for nourishing the next generation. (Author W. Pokrzywa. Made with Biorender software).

The research is the subject of the cover story of this issue of EMBO Reports and is discussed in the News & Views section. 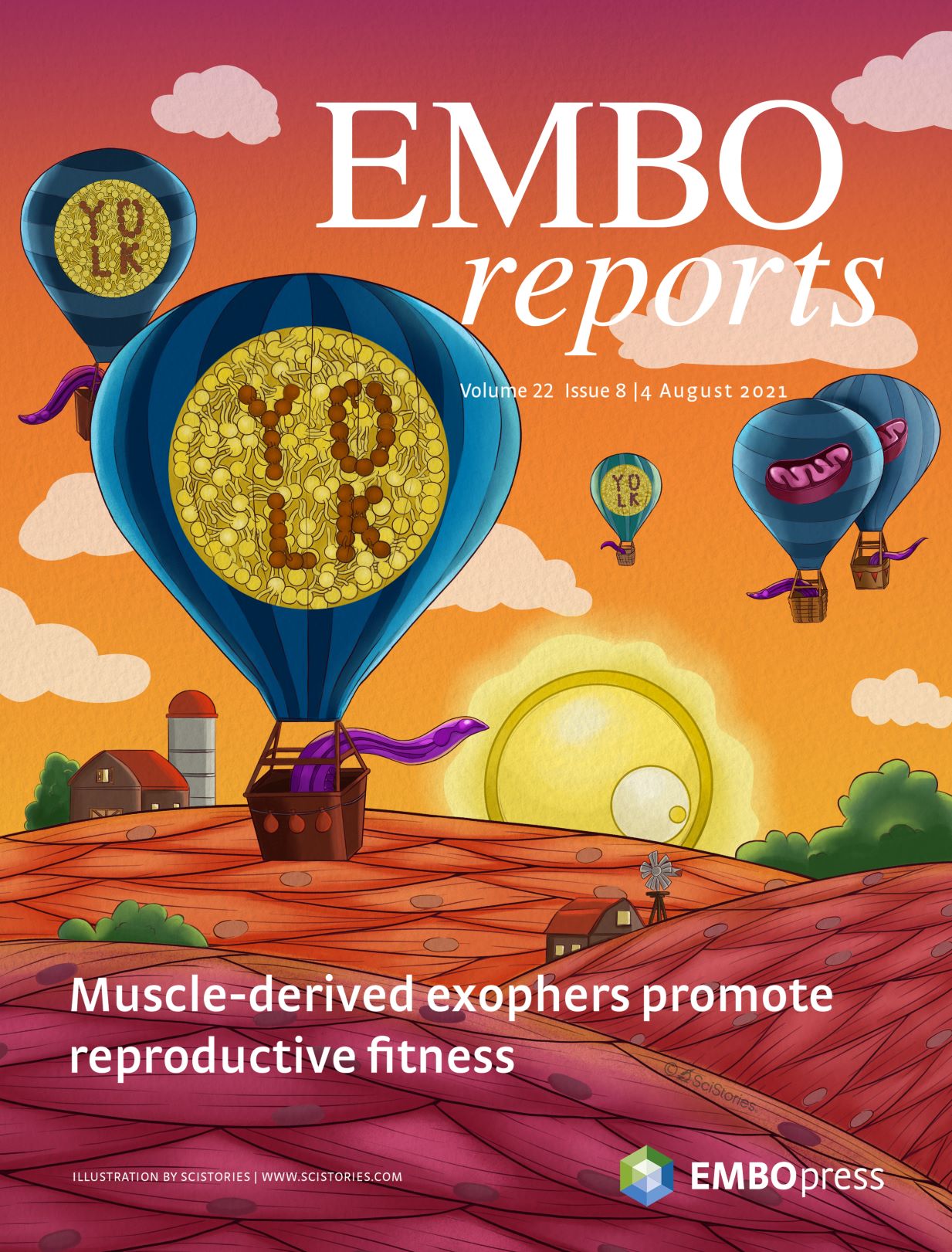