Genomics dissection of the cardiac pacemakers

Heart arrhythmia is a condition where the rhythm of heart contraction becomes irregular, which could lead to devastating consequences such as heart attack and stroke. Despite its seriousness, heart arrhythmia is very little understood compared to other types of heart diseases. The genetic factors which cause the condition is not well known and there is limited medical treatment available to treat such conditions.

The pacemaker is a group of cells in the heart which is responsible for maintaining the rhythmic contraction of the heart. The actions of two pacemakers, the sinoatrial node (SA node) and the atrioventricular node (AV node), ensure sequential contraction of the atria and ventricles in order to maintain unidirectional blood flow. If the pacemakers develops abnormally, the rhythm of heart contraction is affected, leading to different types of arrhythmia depending on which pacemaker is affected and the nature of the defect.

To study how the pacemaker develops and functions, we use the zebrafish as a model organism due to its similarity in heart physiology and genetics to that of humans. We utilized the zebrafish transgenic lines sqet33mi59BEt and sqet31Et which express green fluorescent protein in the sinoatrial ring (SAR) and atrioventricular canal (AVC), cardiac regions known to possess pacemaker activity. These transgenic lines enabled us to isolate cells of these pacemaker regions by FACS and profile its transcriptome by RNA-seq. Results of this study are now presented in two publications, in which we profiled the transcriptome and electrophysiology of the SAR (Minhas et al., 2021) and AVC (Abu Nahia et al., 2021).

Compared to the rest of the heart, the zebrafish SAR overexpresses hcn4 as well as genes encoding calcium- and potassium-gated channels implicated in SA node function in mammals. Moreover, genes encoding components of the BMP and Wnt signaling pathways, as well as members of the Tbx family, which have previously been implicated in pacemaker development, were also overexpressed in the SAR. A number of SAR-overexpressed genes had human homologues implicated in various forms of congenital heart diseases, which suggest the relevance of our transcriptomics resource to studying human heart conditions. Functional analyses of three SAR-overexpressed genes, pard6a, prom2, and atp1a1a.2, uncovered their novel role in heart development and physiology.

On the other hand, the zebrafish AVC transcriptome exhibits hallmarks of mammalian AV node, including the expression of genes implicated in its development and those encoding connexins forming low conductance gap junctions. Transcriptome analysis uncovered protein-coding and noncoding transcripts enriched in AVC, which have not been previously associated with this structure, as well as dynamic expression of epithelial-to-mesenchymal transition markers and components of TGF-b, Notch, and Wnt signaling pathways likely reflecting ongoing AVC and valve development. Abolishing the main pacemaker in the SAR resulted in spontaneous activation in the AVC region, suggesting that it possesses inherent automaticity although insufficient to replace the SAR. Interestingly, we found that the SAR and AVC express partially overlapping genes encoding ion channels and connexins which likely underlie the distinct functions between the two pacemakers.

Our results establish that the zebrafish SAR and AVC possess molecular and physiological hallmarks of mammalian pacemakers in terms of automaticity, low conductance properties, and conserved expression of developmental genes and markers. The transcriptome data generated in these two studies will enrich our knowledge of molecular factors, including novel candidate genes and noncoding transcripts, implicated in the development of pacemakers and maintenance of heart rhythm.

The results of the research conducted by the scientists from the Laboratory of Zebrafish Developmental Genomics of IIMCB together with international collaborators led to publishing two articles: 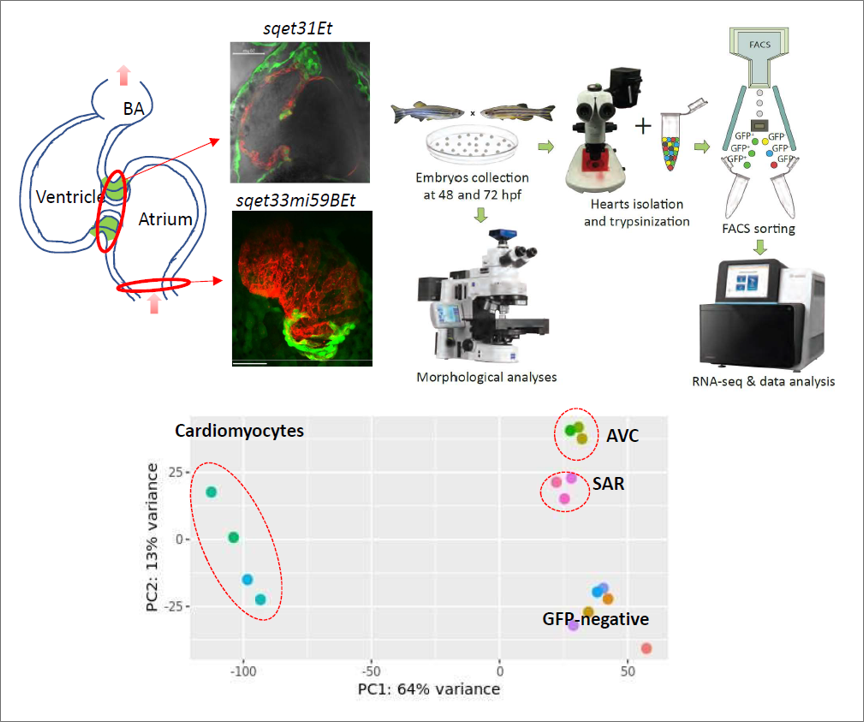 Fig. Transcriptome profiling of the SA and AV pacemakers in zebrafish. (A) Utilizing transgenic lines sqet33mi59Bet and sqet31Et, we isolated specific cell populations corresponding to the SAR and AVC regions by FACS and profiled their transcriptome using RNA-seq. (B) PCA analysis showing distinct profiles of SAR and AVC cell populations from working cardiomyocytes.