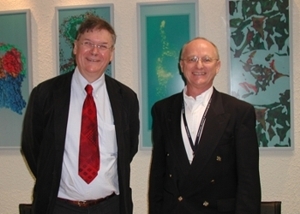 On Nov. 6, 2008 IIMCB was visited by Prof. Tim Hunt, who received the Nobel Prize in Physiology and Medicine in 2001 for discovery of cyclins. Hunt found that cyclins begin to be synthesised after the sea urchin’s eggs are fertilized and increase in levels during interphase, until they drop very quickly in the middle of mitosis in each cell division. He also found that cyclins are present in vertebrate cells where they also regulate the cell cycle. He and others subsequently showed that the cyclins bind and activate a family of protein kinases, now called the cyclin-dependent kinases. Hunt shared the prize with Leland Hartwell and Paul Nurse. Prof. Hunt delivered a lecture „Getting in and out of mitosis" during the meeting of recipients of the Foundation for Polish Science award.