2009 - Professor of Biological Sciences, nomination by the President of the Republic of Poland

The prevalent DNA modification in eukaryotes is C5-cytosine methylation. Biophysically, this modification stabilizes double-stranded DNA. Evolution has built on and enhanced this tendency to utilize C5-methylation, which predominantly occurs in the symmetric CpG context for transcription control. Consistent with its biophysical effects, methylation in transcription control structures (e.g., promoters) represses transcription; methylation elsewhere (e.g., gene bodies) enhances transcription by suppressing aberrant initiation. Methylation can be introduced in one step by de novo and maintenance methyltransferases and propagated by feed-forward loops that link DNA methylation and repressive chromatin marks. Methylation is most easily lost passively as a result of DNA replication, but it can also be actively erased through a mechanism that utilizes TET catalyzed oxidation to prime DNA for base excision repair. The genetics and cell biology of DNA methylation are unique to eukaryotes, but the biochemistry of DNA methylation (and to some extent also DNA demethylation) is also conserved in prokaryotes. We seek to answer biochemical questions using more robust bacterial proteins and answer genetic/ cell biological questions using zebrafish models and human genetic data (e.g., for malignancies with defects in demethylation machinery).

In 2019, we continued our research on relatively well-behaved prokaryotic model proteins to study the specific recognition of 5-methylcytosine and its oxidized congeners in DNA. The repertoire of 5mC and 5hmC binding proteins is relatively small, and most proteins that specifically bind DNA with these bases contain the same domains. Domains that bind fully methylated DNA in the context of CpG include zinc finger and MBD domains. In contrast, hemi-methylated DNA is typically bound by SRA domains. During the last year, we considerably broadened the repertoire of known domains that recognize 5mC and 5hmC. SRA domains belong to the larger superfamily of PUA domains, which also comprises PUA domains in the strict sense, ASCH domains, EVE domains, and several other lesser known domain groups. To the extent that function was known, a clear division of labor appeared to be in place. SRA domains were associated with the binding of modified DNA, whereas other families within the PUA superfamily either were known to be involved in the binding or processing of modified RNA or had completely unknown functions. In silico screens that were performed in collaboration with Dr. Shuang-Yong Xu (New England Biolabs) showed that many PUA superfamily domains in bacteria are fused to endonucleolytic domains that are associated with DNA cleavage. Subsequent biochemical experiments demonstrated that the fusion proteins indeed cleaved modified DNA, although not with the same degree of specificity as SRA domains (Lutz et al., Nucleic Acids Res, 2019). We also crystallographically characterized a few prototype enzymes and solved their structures with and without DNA. The structures illustrate the mode of recognition of methyl- or hydroxymethyl modifications. Similar DNA modification-sensing domains exist in eukaryotes and have been implicated in malignancies, but their biochemical behavior requires further investigation. NEco is the modification-sensing domain of EcoKMcrA, which is one of the earliest studied restriction endonucleases of E. coli. EcoKMcrA efficiently restricts DNA that contains 5mC or 5hmC, provided the modifications are present in the right context. Efficiency is much greater for fully methylated DNA than for hemi-methylated DNA. Our previous work indicated that the NEco modification-sensing domain was phylogenetically unrelated to other methylationsensing domains. In 2019, we elucidated the binding mode of the domain to modified DNA and found that modification sensing is also locally very different from previous observations (Slyvka et al., Nucleic Acids Res, 2019). To date, NEco has been shown to be very good at discriminating (hydroxy)methylated from unmethylated DNA. Further research will likely expand the currently known and narrowly defined phylogenetic distribution (Fig. 1). 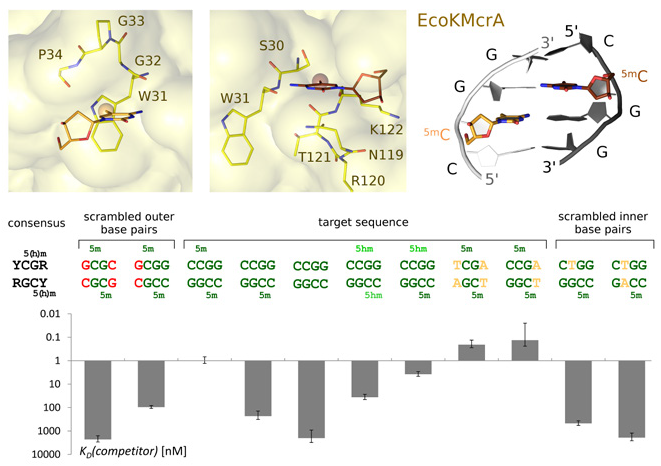 In contrast to methylation sensing, demethylation has no clear equivalent in prokaryotes and thus needs to be studied using eukaryotic models. Our research primarily focuses on the ways in which TET proteins identify their targets. Two of our collaborators, Dr. Tomasz Jurkowski (Cardiff University, United Kingdom) and Dr. Tim Hore (Otago University, New Zealand), provided strong biochemical evidence that the locus specificity of TETs is at least partially attributable to sequence specificity. We solved structures with preferred and discriminated substrates to better understand the mode of sequence recognition. Based on the lack of sequence-specific contacts between TETs and their target DNAs outside the CpG core recognition sequence, we initially hypothesized that DNA bending was responsible for sequence specificity. Our crystal structures do not support this hypothesis, however, and instead reveal an unexpected mechanism of sequence recognition that also explains similarities in preference of different TET paralogues. We are also continuing our work on links between DNA reprogramming and DNA repair. Some of our experiments, such as investigating the role of NEIL1 and TDG in the excision of oxidized 5-methylcytosine bases, are consistent with the general paradigm that DNA reprogramming co-opts DNA repair. However, based on much circumstantial evidence and the work of others, we suspect that the converse may also be true and that DNA repair may use intermediates that are normally associated with reprogramming. We will test this hypothesis both biochemically and bioinformatically. 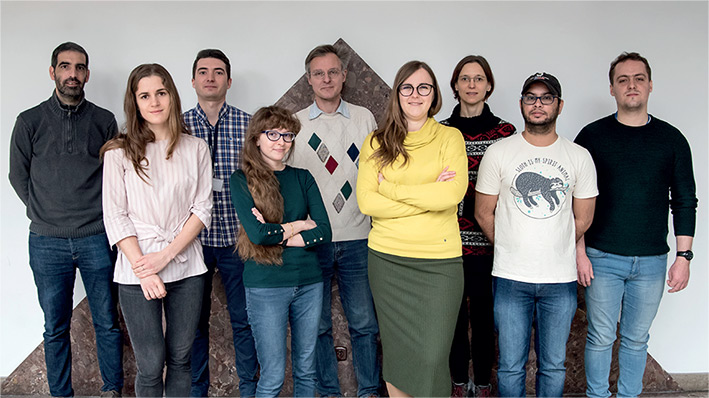 This email address is being protected from spambots. You need JavaScript enabled to view it.

DNA adenine methylation in eukaryotes: Enzymatic mark or a form of DNA damage?

Crystal structures of the EVE-HNH endonuclease VcaM4I in the presence and absence of DNA.

Halogen Atoms in the Protein-Ligand System. Structural and Thermodynamic Studies of the Binding of Bromobenzotriazoles by the Catalytic Subunit of Human Protein Kinase CK2.

Distinction between self and non-self in restriction modification: The mysterious case of type IIL enzymes.

In Vitro Directed Evolution of a Restriction Endonuclease With More Stringent Specificity.

Reversal of nucleobase methylation by dioxygenases.

Activity and structure of EcoKMcrA.

Unique mechanism of target recognition by PfoI restriction endonuclease of the CCGG-family.

The Bacteroidetes Q-Rule: Pyroglutamate in Signal Peptidase I Substrates.

High resolution structure of an M23 peptidase with a substrate analogue

Structural basis of the methylation specificity of R.DpnI

Crystal structure of the antimicrobial peptidase lysostaphin from Staphylococcus simulans

Isolation of monomeric photosystem II that retains the subunit PsbS

RIBER/DIBER: a software suite for crystal content analysis in the studies of protein-nucleic acid complexes

DNA intercalation without flipping in the specific ThaI-DNA complex

1.45 A resolution crystal structure of recombinant PNP in complex with a pM multisubstrate analogue inhibitor bearing one feature of the postulated transition state

DIBER: protein, DNA or both?

The recognition domain of the BpuJI restriction endonuclease in complex with cognate DNA at 1.3-A resolution

Central base pair flipping and discrimination by PspGI

Monomeric restriction endonuclease BcnI in the apo form and in an asymmetric complex with target DNA.

Folds and activities of peptidoglycan amidases

The statistics of the highest E value

The highest reflection intensity in a resolution shell

Nucleotide flips determine the specificity of the Ecl18kI restriction endonuclease

Fighting an enemy within: cytoplasmic inhibitors of bacterial cysteine proteases

Crystal structure of a fragment of mouse ubiquitin-activating enzyme.

Substrate access to the active sites in aminopeptidase T, a representative of a new metallopeptidase clan.

Pseudomonas aeruginosa LD-carboxypeptidase, a serine peptidase with a Ser-His-Glu triad and a nucleophilic elbow.

Structure of the metal-independent restriction enzyme BfiI reveals fusion of a specific DNA-binding domain with a nonspecific nuclease.

A comparison of staphostatin B with standard mechanism serine protease inhibitors

Characterization of the HslU chaperone affinity for HslV protease

Latent LytM at 1.3A resolution

The Staphostatin-staphopain complex: a forward binding inhibitor in complex with its target cysteine protease.

A novel class of cysteine protease inhibitors: solution structure of staphostatin A from Staphylococcus aureus.