We study the ways in which intracellular signal transduction and membrane trafficking in endocytosis are integrated at the molecular level. We focus on proteins that play well-known roles in endocytosis to investigate their involvement in various signaling pathways and their impact on patterns of gene expression. Our efforts initially focused on studying the endosomal and nuclear roles of APPL proteins. In recent years, we broadened our interests to other multifunctional proteins that act in endocytosis and signaling. The specific projects that are developed by our group seek to answer the following questions:

In one of our previous projects, we identified four components of endosomal sorting complexes required for transport (ESCRTs) as novel inhibitors of nuclear factor-κB (NF-κB) signaling (Mamińska et al., Sci Signal, 2016). We found that the depletion of several ESCRT subunits in the absence of cytokine stimulation potently activated NF-κB signaling in cultured human cells, zebrafish embryos, and fat bodies in flies. These effects depended on cytokine receptors, such as lymphotoxin β receptor (LTβR) and tumor necrosis factor receptor 1 (TNFR1). We demonstrated that upon the depletion of ESCRT subunits, both receptors became concentrated on and signaled from endosomes. The endosomal accumulation of LTβR induced its ligandindependent oligomerization and inflammatory NF-κB signaling. We proposed that ESCRTs constitutively control the distribution of cytokine receptors in their ligand-free state to restrict their signaling.

As a follow-up of this work, we further investigated the mechanisms of intracellular trafficking and inflammatory signaling by LTβR (Banach-Orłowska et al., J Cell Sci, 2018). We showed that various types of endolysosomal dysfunction lead to the accumulation of ligand-free LTβR on endosomes, but the exact topology of the receptor within these compartments determines whether NF-κB signaling is induced or prevented. Most recently, we focused on the ligand-induced trafficking and signaling of LTβR (Banach-Orłowska et al., Cell Commun Signal, 2019). We found that plasma membrane cholesterol content is important for proper LTβR internalization to prevent overstimulation of the NF-κB pathway and the overproduction of cytokines. We proposed that drugs that modulate cholesterol levels could potentially improve the efficacy of LTβR-based therapies for autoimmune diseases and cancer.

In another recently published study, we uncovered an exciting connection between two ESCRT accessory proteins (VPS4A and VPS4B) and cancer (Szymańska et al., EMBO Mol Med, 2020). In humans, these ubiquitous ATPases are encoded by VPS4A and VPS4B paralogous genes. Together with other ESCRT subunits, VPS4 proteins participate in the remodeling of biological membranes that occurs during endocytosis and other intracellular processes, such as cytokinesis and exosome release. Thus, VPS4A and VPS4B are of importance for cellular homeostasis, and as enzymes they may represent convenient drug targets. By first exploring the publicly available Cancer Genome Atlas, we found that the VPS4B gene is frequently lost in many cancer types, notably colorectal cancer, along with a larger part of chromosome 18. Our clinical collaborators at the Maria Skłodowska-Curie Institute-Oncology Centre in Warsaw confirmed lower levels of VPS4B protein in tumor samples from colorectal cancer patients compared with healthy colon tissue. Using cancer cell lines that were grown in vitro and in vivo, we found that VPS4A and VPS4B paralogs were synthetically lethal, in which their simultaneous depletion (VPS4A+VPS4B) caused cell death, whereas the loss of any single paralog (VPS4A or VPS4B) was well tolerated. Our study demonstrated that VPS4B-deficient cancer cells are selectively vulnerable to perturbations of VPS4A activity. Importantly, we also discovered that dying cells that lacked both VPS4A and VPS4B proteins induced a strong inflammatory response that could evoke an anti-tumor reaction in the organism, thus supporting a positive therapeutic outcome (Fig. 1). In summary, we provided a rationale for future work to develop a VPS4 inhibitor as a putative precision therapy for patients with VPS4B-deficient cancers, such as colorectal cancer. 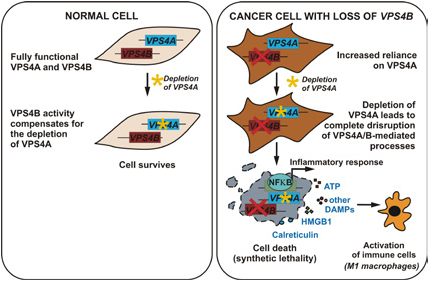 fig.1. Model of synthetic lethal interaction between VPS4A and VPS4B. (Left) In normal cells, both VPS4A and VPS4B act redundantly in several essential intracellular processes. The single depletion of either paralog (e.g., VPS4A) is well tolerated because the unperturbed expression of the other paralog alone (e.g., VPS4B) can compensate for its downregulated counterpart. (Right) Cells that have lost VPS4B expression (e.g., because of oncogenic genome rearrangements) rely exclusively on VPS4A activity. The inactivation of VPS4A in these cells leads to synthetic lethality, accompanied by the strong induction of an inflammatory response and the release of immunogenic DAMPs. Immunomodulatory molecules that are released by dying VPS4A+VPS4B-deficient cancer cells can elicit paracrine effects on primary immune cells, such as reprogramming of macrophages toward the M1 anti-tumor phenotype. Author: Ewelina Szymańska (after Szymańska et al., EMBO Mol Med, 2020) 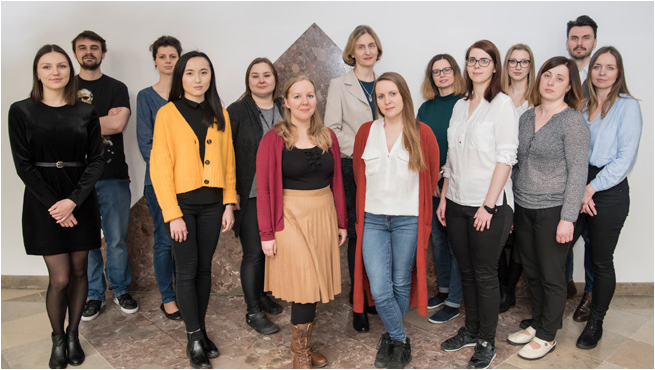 Synthetic lethality between VPS4A and VPS4B triggers an inflammatory response in colorectal cancer.

FGFR1 Clustering With Engineered Tetravalent Antibody Improves the Efficiency and Modifies the Mechanism of Receptor Internalization.

Integration of the Endocytic System into the Network of Cellular Functions.

Endosomal "sort" of signaling control: The role of ESCRT machinery in regulation of receptor-mediated signaling pathways.

Lipid peroxidation in face of DNA damage, DNA repair and other cellular processes

APPL1 endocytic adaptor as a fine tuner of Dvl2-induced transcription

Effects of membrane trafficking on signaling by receptor tyrosine kinases

The new faces of endocytosis in signaling

Biochemical characterization of APPL endosomes: the role of annexin A2 in APPL membrane recruitment

Endocytic proteins in the regulation of nuclear signaling, transcription and tumorigenesis

[Effectors of GTPase Rab5 in endocytosis and signal transduction]

Reconstitution of Rab- and SNARE-dependent membrane fusion by synthetic endosomes.

Mechanisms and functions of endocytosis.

On the transition from the meiotic to mitotic cell cycle during early mouse development.