2018 - Commemorative medal for the 100th Anniversary of the Nencki Institute for outstanding contribution to the development of this Institute, supporting its activities, shaping the image and building a mutual success
2013 - Crystal Brussels Prize for outstanding achievements in 7th Framework Programme of the European Union for Research and Development
2013 - Award from the 2nd Division of Biological and Agricultural Sciences, Polish Academy of Sciences for series of works on β-catenin
2011 - Konorski Award for the best Polish research work in neurobiology awarded by the Polish Neuroscience Society and Committee on Neurobiology of the PAS, Warsaw
2008 - Officer's Cross of the Order of Polonia Restituta awarded by the President of Poland
2004-2007 - Professorial Subsidy Program Award from Foundation for Polish Science
2003 - Prime Minister Award for the scientific achievements, Warsaw
2001 - Award from the Division of Biological Sciences of the PAS for the work on CaBP
1998 - Knight's Cross of the Order of Polonia Restituta awarded by the President of  Poland
1987 - Polish Anatomical Society Award for the article in “Advances in Cell Biology”
1986 - Skarzynski Award from the Polish Biochemical Society for the best review article in “Advances in Biochemistry”, Warsaw
1977 - Mozolowski Award, Polish Biochem. Society for outstanding Polish young biochemist
1977 - Parnas Award from Polish Biochem. Society for the best paper in biochemical research
1976 - MSc, Magna cum laude, University of Warsaw

We are interested in the molecular mechanisms that are implicated in neurodegeneration, with a special emphasis on the role of Ca2+ homeostasis and signaling. These processes are being studied at the genomic, proteomic, and cellular levels using mostly zebrafish, rats, and mice as model organisms. The projects focus on proteins that are involved in store-operated Ca2+ entry (SOCE) and Ca2+ homeostasis in mitochondria, the involvement of potassium channels in the brain ventricular system, and the in vivo analysis of Ca2+ homeostasis in neurons using zebrafish models. For recent reviews, see Wegierski and Kuznicki (Cell Calcium, 2018) and Winata and Korzh (FEBS Lett, 2018).

ROLE OF STIM PROTEINS IN STORE-OPERATED Ca2+ ENTRY IN NEURONS

We previously showed that STIM1 is involved in a thapsigargin-induced SOCE-like process, whereas STIM2 is mostly active after the EGTA-driven depletion of extracellular Ca2+ (GruszczynskaBiegala et al., PLoS One, 2011; GruszczynskaBiegala and Kuznicki, J Neurochem, 2013). We searched for new partners of STIMs other than ORAI channels and found that endogenous STIMs associate with GluA subunits of AMPA receptors (Gruszczynska-Biegala et al., Front Cell Neurosci, 2016). STIM proteins also associate with NMDA receptors in vitro. The results suggest cross-talk between STIM proteins and NMDA receptors and their effect on Ca2+ influx through NMDA receptors (Gruszczynska-Biegala et al., Cells, 2020). Using zebrafish as a model, we study STIM2 functions in vivo. We evaluated the expression of Calcium Toolkit genes in the zebrafish brain and established the level of SOCE components (Wasilewska et al., Genes, 2019). We generated stim2a, stim2b, and stim2a/stim2b knockout zebrafish lines and analyzed them using in vivo calcium imaging in the cytosol and mitochondria, behavioral tests, and scRNA-Seq.

Our studies of Huntington’s disease have focused on the role of CacyBP/SIP protein in β-catenin regulation in medium spiny neurons from YAC128 mice (i.e., a model of Huntington’s disease) and in cacybp knockout zebrafish. Mutants that stabilize the dimerization domain of CacyBP/SIP had no effect on the Siah-1-dependent β-catenin degradation pathway, but increased β-catenin levels in cacybp knockout zebrafish embryos.

A loss-of-function mutation of PINK1 causes early-onset Parkinson’s disease in humans. In collaboration with Oliver Bandmann (University of Sheffield), we used a pink1 mutant (pink-/-) zebrafish line to study alterations of Ca2+ homeostasis (Flinn et al., Ann Neurol, 2013; Soman et al., Eur J Neurosci, 2016). We generated mcu knockout zebrafish, which are viable and fertile. The pink1- /-/mcu-/- double-knockout line exhibited no loss of dopaminergic neurons, suggesting that Ca2+ that enters mitochondria via the mitochondrial Ca2+ uniporter is involved in the pathology of the pink1 mutant. We expressed a mitochondrial Ca2+ probe (CEPIA2mt) under a pan-neuronal promoter (elavl3) to visualize Ca2+ levels in the mitochondrial matrix of zebrafish. Lightsheet fluorescence microscopy enabled us to visualize chemically inducible Ca2+ flux in zebrafish neurons in vivo. Mutations of NPC2, SGSH, PPP3CA, and PTPN4 have been linked to neurological problems. Using CRISPR/Cas9 technology, we created zebrafish lines with genetic changes that mimic those that are found in patients. These zebrafish lines are being used to study Ca2+ homeostasis and its impact on the progression of neurodegeneration that is observed in patients with Niemann-Pick disease type C (mutation of NPC2), mucopolysaccharidosis type III A (SGSH), and child with mutated calcineurin (PPP3CA; Rydzanicz et al., Eur J Hum Genet, 2018). We also created zebrafish lines with the following calcium sensors under the elavl3 promoter: G-CEPIAer, GEM-CEPIAer, and CAMPARI2. We use these lines to monitor [Ca2+] in neurons in healthy and mutant zebrafish.

Subunits of the voltage-gated potassium channels Kcnb1 (Kv2.1) and Kcng4 (Kv6.4) are expressed in several hollow organs (e.g., brain ventricular system [BVS], ears, and eyes) where they form tetrameric K+ channels and antagonize each other’s activity. Kcnb1 deficiency in zebrafish causes microcephaly, and Kcnb1 gain-offunction causes hydrocephalus. Kcng4 acts in a opposite manner (Shen et al., Sci Rep, 2016). Deficiency of the BVS in humans causes epilepsy (Jedrychowska and Korzh, Dev Dynam, 2019). Formation of the BVS occurs during the early neural development of vertebrates (Korzh, Cell Mol Life Sci, 2018). Deficiency of the BVS has been linked to numerous neurodegenerative diseases. Formation of the BVS depends on many factors, including the ependyma (i.e., cells that line the BVS cavity) and circumventricular organs, including the choroid plexus (Garcia-Lecea et al., Front Neuroanat, 2017; Korzh and Kondrychyn, Semin Cell Dev Biol, 2019). To study the role of K+ channels in the development of hollow organs, we generated a mutant of kcnb1 and two mutants of kcng4b with deficiency of the BVS and ears. To distinguish the mechanism of action of KCNB1 mutations in humans, we initiated an analysis of developmental defects that are caused by mRNA of these mutants in the developing brain and ears in zebrafish. 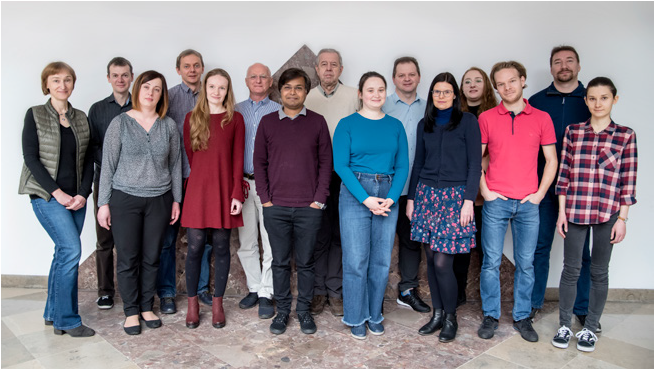 Transgenic Mice Overexpressing Human STIM2 and ORAI1 in Neurons Exhibit Changes in Behavior and Calcium Homeostasis but Show No Signs of Neurodegeneration.

Identification of Zebrafish Calcium Toolkit Genes and their Expression in the Brain.

Glomerular permeability is not affected by heparan sulfate glycosaminoglycan deficiency in zebrafish embryos.

Changes in Calcium Homeostasis and Gene Expression Implicated in Epilepsy in Hippocampi of Mice Overexpressing ORAI1.

Neuronal calcium signaling via store-operated channels in health and disease.

ST8SIA2 promotes oligodendrocyte differentiation and the integrity of myelin and axons

P53 Dysfunction in Neurodegenerative Diseases – The Cause or Effect of Pathological Changes?

Time Courses of Cortical Glucose Metabolism and Microglial Activity Across the Life Span of Wild-Type Mice: A PET Study.

ZnO@Gd2O3 core/shell nanoparticles for biomedical applications: Physicochemical, in vitro and in vivo characterization.

Development of Circumventricular Organs in the Mirror of Zebrafish Enhancer-Trap Transgenics.

Molecular anatomy of the thalamic complex and the underlying transcription factors

Be Healthy as a Fish Educational Program at the International Institute of Molecular and Cell Biology in Warsaw, Poland.

Postnatal isoform switch and protein localization of LEF1 and TCF7L2 transcription factors in cortical, thalamic, and mesencephalic regions of the adult mouse brain

Hsp90 and its co-chaperone, Sgt1, as autoantigens in dilated cardiomyopathy

CYR61, a matricellular protein, is needed for dendritic arborization of hippocampal neurons

Honarnejad K, Daschner A, Giese A, Zall A, Schmidt B, Szybinska A, Kuznicki J, Herms J

In vitro findings of alterations in intracellular calcium homeostasis in schizophrenia.

Resistance of the dopamine D4 receptor to agonist-induced internalization and degradation.

Morgana/CHP-1 is a novel chaperone able to protect cells from stress.

Mitochondrial genotype in vulvar carcinoma - cuckoo in the nest

Immunolocalization of STIM1 in the mouse brain.

Expression of STIM1 in brain and puncta-like co-localization of STIM1 and ORAI1 upon depletion of Ca(2+) store in neurons.

The mammalian CHORD-containing protein melusin is a stress response protein interacting with Hsp90 and Sgt1.

Sgt1 has co-chaperone properties and is up-regulated by heat shock.

Variation in NPC1, the gene encoding Niemann-Pick C1, a protein involved in intracellular cholesterol transport, is associated with Alzheimer disease and/or aging in the Polish population

The relationship between adiponectin levels and metabolic status in centenarian, early elderly, young and obese women

Density of Sgt1-immunopositive neurons is decreased in the cerebral cortex of Alzheimer's disease brain.

Calcium-binding calmyrin forms stable covalent dimers in vitro, but in vivo is found in monomeric form.

Genetic alterations in accelerated ageing syndromes. Do they play a role in natural ageing?

Characterization of calretinin I-II as an EF-hand, Ca2+, H+-sensing domain

The E318G substitution in PSEN1 gene is not connected with Alzheimer's disease in a large Polish cohort.

Gene therapy of hematopoietic cells: development of strategies and vectors. (in Polish)

Human Sgt1 binds HSP90 through the CHORD-Sgt1 domain and not the tetratricopeptide repeat domain.

The sun, the genome, the internet… eugenics?

Genetic diversity within the R408W phenylketonuria mutation lineages in Europe

Alzheimer's disease: between diagnostic, economy and ethic (in Polish)

Regulation of cell specific expression of calcyclin (S100A6) in nerve cells and other tissues.

Upstream stimulatory factor is involved in the regulation of the human calcyclin (S100A6) gene.

Characterization of the interaction of calcyclin (S100A6) and calcyclin-binding protein.

Cloning - the crossroads of biology and culture