Laboratory of Protein Metabolism in Development and Aging: Pokrzywa Laboratory

Correspondence address:
Laboratory of Protein Metabolism in Development and Aging
International Institute of Molecular and Cell Biology
4 Ks. Trojdena Street, 02-109 Warsaw, Poland
Email: This email address is being protected from spambots. You need JavaScript enabled to view it.
tel: +48 (22) 597 0742; fax: +48 (22) 597 0715

The proteome is defined as the entire set of proteins that are expressed in a given cell type or organism, which can vary with time and physiological status. Quality control networks support the integrity of the cellular proteome. The human protein homeostasis network (proteostasis) involves >1000 accessory factors and regulatory components that govern protein synthesis, folding, and degradation. Defective folding can result in the greater abundance of toxic protein aggregates, which can endanger the integrity of the entire proteome. With age, the ability of post-mitotic cells to maintain a balanced proteome is gradually compromised, particularly by the downregulation of molecular chaperones and lower efficiency of protein degradation. As such, impairments in proteostasis are a major hallmark of aging and associated with dementia, neurodegeneration, type 2 diabetes, cystic fibrosis, cancer, and cardiovascular disease (Labbadia and Morimoto, 2015). One of the central nodes of the eukaryotic proteostasis network is the interaction between molecular chaperones and proteolytic machineries. To maintain the cellular proteome, molecular chaperones and ubiquitin‐dependent degradation pathways (ubiquitin/proteasome system [UPS]) coordinate protein refolding and the removal of terminally damaged proteins. Irreversibly affected proteins are recognized by chaperone‐assisted E3 ubiquitin ligases, which target them for degradation by the UPS or autophagy (Fig. 1).
Our research concentrates on the basic understanding of the spatiotemporal regulation of protein quality control activity and substrate processing. We use cell culture systems and Caenorhabditis elegans as an ideal animal model to study the organismal regulation of stress responses and proteostasis. 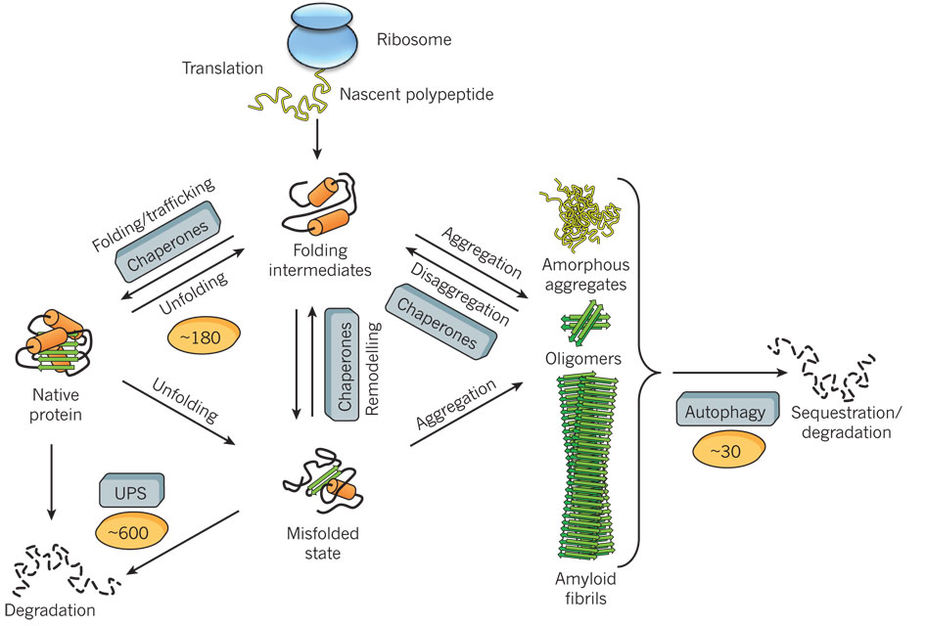 Fig. 1. The proteostasis network integrates chaperone pathways for the folding of newly synthesized proteins, for the remodeling of misfolded states, and for disaggregation with protein degradation that is mediated by the UPS and autophagy system. Approximately 180 different chaperone components and their regulators orchestrate these processes in mammalian cells, whereas the UPS comprises ∼600 different components, and the autophagy system comprises ∼30 different components. Figure from Harlt et al., 2011.

We focus mainly on the following projects:

1. Identification of signals that coordinate the function of distinct E3 ligases
The UPS is a major proteolytic route that maintains the proteome during development, stress, and aging. Protein degradation is mainly mediated by the 26S proteasome upon the covalent attachment of ubiquitin to target proteins by E1 (activating), E2 (conjugating), and E3 (ligating) enzymes in a process known as ubiquitylation. Despite many structurally unrelated substrates, ubiquitin conjugation is remarkably selective. E3 ubiquitin ligases represent the largest group of proteins within the UPS, which is linked to their crucial role in substrate selection. A detailed analysis of several classes of E3 ligases identified specific proteins and molecular pathways that they regulate. Furthermore, the heterotypic oligomerization of E3 ligases might control the specificity and processivity of ubiquitylation. Recently, Scott and co-workers reported that two distinctive E3s could reciprocally monitor each other for the simultaneous and joint regulation of substrate ubiquitylation. Cullin-RING (CRL) ligase was shown to associate with a mechanistically distinct thioester-forming RBR-type E3, ARIH1, and rely on ARIH1 to directly add ubiquitin chains on CRL substrates (Scott et al., 2016). Therefore, the existence of cooperation between various E3 enzymes, which increases their molecular capabilities, appears to be highly probable but requires further exploration.
Our long-term objective is to understand the mechanistic and developmental aspects of protein degradation pathways that are defined by a specific pair of E3 enzymes. The combination of biochemical, microscopic, and genetic techniques with tissue-specific approaches in C. elegans will allow us to understand the ways in which alternative combinations of E3 proteins fine-tune proteolytic networks.

2. Stress-induced myosin folding and assembly mechanisms.
The assembly and maintenance of myofilaments require a tightly balanced proteostasis network. One key player in myosin organization and muscle thick filament formation in health and disease is the Hsp90 co-chaperone UNC-45.
The activity and assembly of various myosin subtypes are coordinated by conserved UCS (UNC-45/CRO1/She4p) domain proteins. One founding member of the UCS family is the Caenorhabditis elegans UNC-45, a protein that is essential for the organization of striated muscle filaments (Price et al., 2002). Moreover, UNC-45 homologs exist in vertebrates, indicating a conserved requirement for myosin-specific co-chaperones (Price et al., 2002). Indeed, abnormal UNC-45 function is associated with severe muscle defects that result in skeletal and cardiac myopathies (Janiesch et al., 2007).
The integrity of sarcomeric structures is permanently challenged upon muscle growth and mechanical stress. In response to eccentric exercise or damage to myofibers, UNC-45 and the chaperone Hsp90 shuttle between the impaired myofibers to support their repair (Fig. 2). However, little is known about the coordination of protein homeostasis pathways upon mechanical stress. Therefore, the long-term objective of this project is to understand the ways in which the balance between protein folding and degradation networks is coordinated with myosin assembly and muscle integrity. We combine genetic and biochemical approaches to study the conserved function of UNC-45 in myosin assembly and examine the ways in which this function is modulated during mechanical stress. Specifically, we plan to use targeted screening strategies to uncover mechanosensory proteins, chaperones, and UPS and autophagy components that are required for muscle function. The conserved regulation of proteostasis networks is studied in C. elegans, C2C12 mouse myoblasts, and human skeletal muscles. Finally, we want to investigate the remodeling of UNC-45 folding machinery under mechanical stress. A combination of genetic, biochemical, and in vivo imaging techniques will allow us to examine stress-induced changes in protein folding and degradation pathways. The proposed research will have broad implications for our understanding of myosin assembly, human myopathies, and proteostasis mechanisms in general. 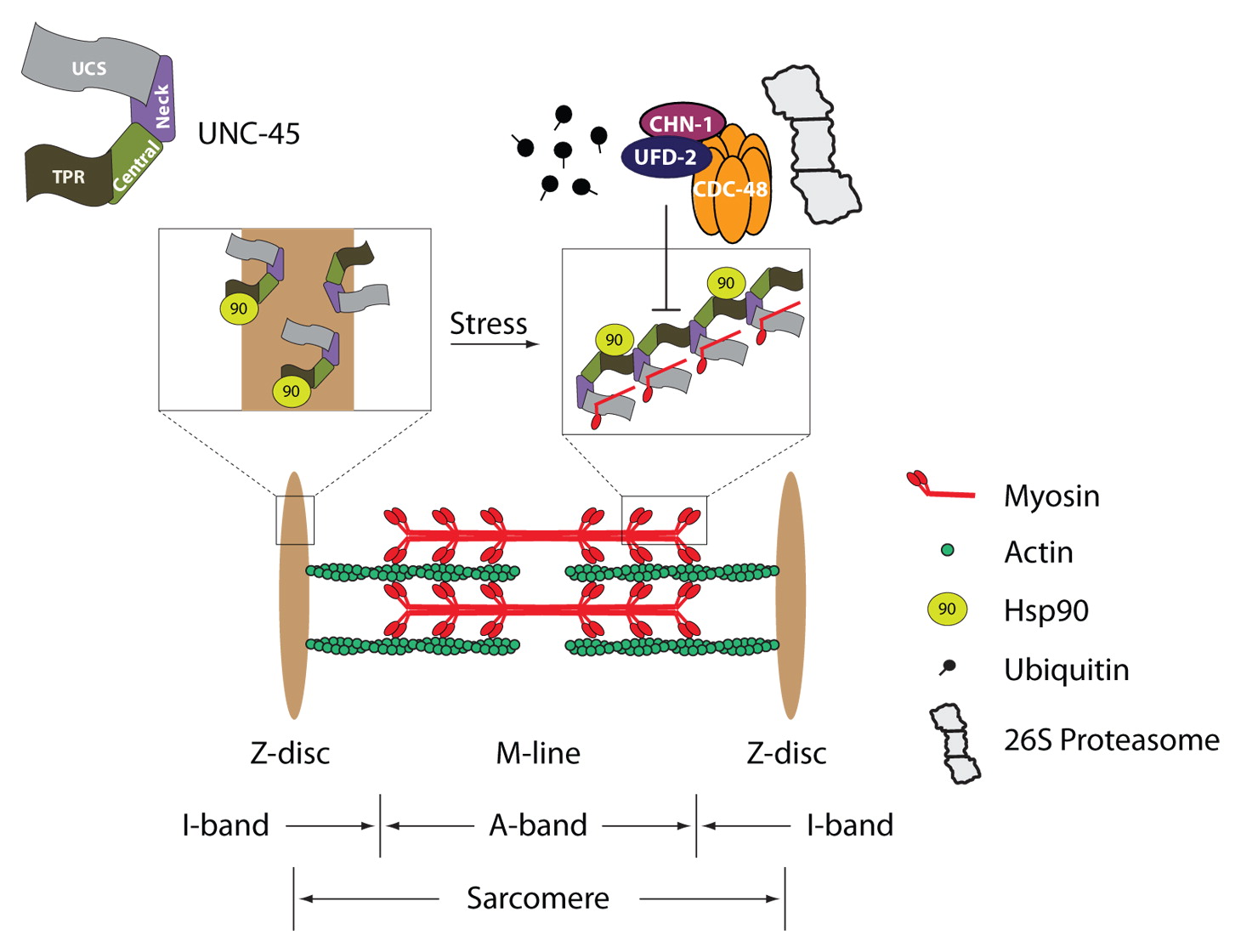 Fig. 2. Model of UNC-45 polymerization in response to stress. The sarcomeric unit is defined by the distance between two Z-discs, including the A-band, I-band, and M-line. UNC-45 is composed of tandem modules that allow the simultaneous binding of Hsp70/Hsp90 and myosin, enabling the folding and assembly of myosin in regular spacing. In the fully developed muscle, UNC-45 might be stored on the Z-disk in its monomeric form, whereas the stress-induced relocation of UNC-45 to growing or damaged myofilaments might facilitate the assembly of polymeric UNC-45 chains. Figure adapted from Pokrzywa and Hoppe, 2013. 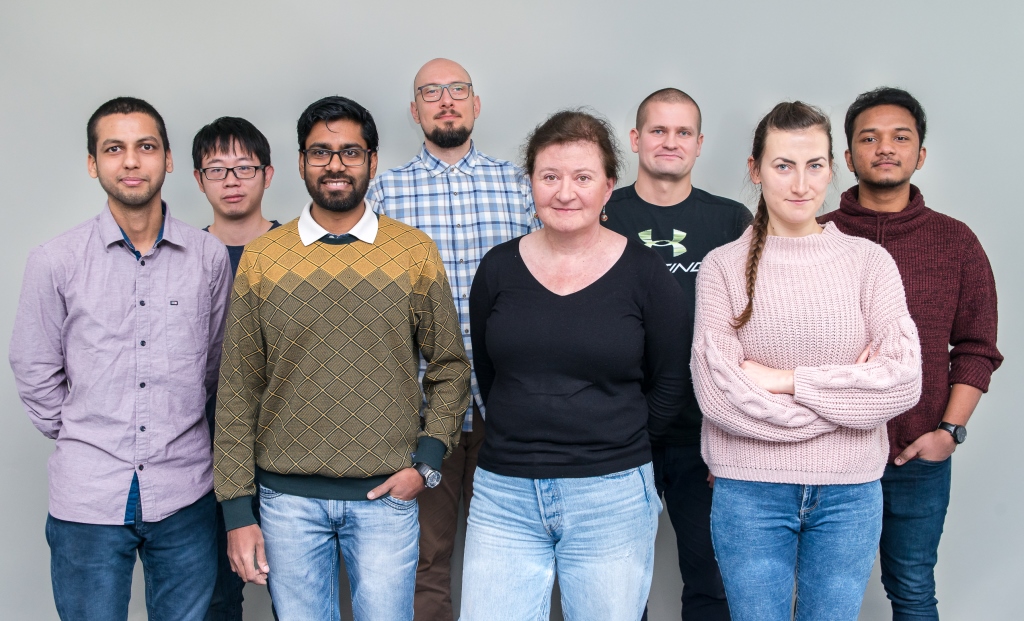