Mammalian/mechanistic target of rapamycin (mTOR) is a serine-threonine kinase that is involved in almost every aspect of mammalian cell function. It forms two protein complexes, initially identified as regulating translation (mTOR complex 1 [mTORC1]) or influencing the actin cytoskeleton (mTORC2). My postdoctoral work showed that the regulation of mTOR-dependent translation contributes to dendritogenesis (Jaworski et al., J Neurosci, 2005). This was subsequently confirmed by our recent work in which we identified the GluA2 subunit of glutamate receptors as a protein that is both translated in an mTORC1-dependent manner and vital for dendritogenesis (Koscielny et al., Mol Neurobiol, 2018). However, the list of cellular processes that involve both mTORCs has expanded, and new ways of regulating mTORC activity, novel mTOR partners, and mTOR effectors have been discovered. Nonetheless, their contribution to the neuronal functions of mTOR and neuropathology is still poorly understood. Therefore, since the inception of our laboratory, we have sought to identify mTOR partners and regulated proteins that are involved in neuronal development and characterize mTOR dysfunction in neuropathology.

To reach our scientific objectives, we have been primarily using a well-established, relatively simple, and robust model of the dendritogenesis of neurons that are cultured in vitro. Using this approach, we performed both proof-of-principle experiments and unbiased screens that clearly demonstrated mTOR functions during neuronal development beyond the canonical control of translation (e.g., regulation of the cytoskeleton and transcription). These experiments also extended our general knowledge of molecular mechanisms downstream of mTOR and new mechanisms that underlie dendritogenesis (Swiech et al., J Neurosci, 2011; Urbanska et al., J Biol Chem, 2012 & Sci Rep, 2017; Malik et al., J Biol Chem, 2013).

Progress in meeting our research goals allowed us to merge some objectives and hone our main focus toward identification of the cellular compartment-specific regulation and functions of mTOR in developing neurons, with a particular focus on intracellular trafficking events, which were at the center of our research efforts during the last 6 years (Main Research Objective 1). Notably, both the role of mTOR in intracellular trafficking control and the role of membrane trafficking in neuronal development and disease are still understudied topics.

Therefore, focusing on these areas (e.g., the interplay between mTORCs and molecular motors, such as the dynein-dynactin complex and kinesins, and small GTPases of the Rab family and their regulators) creates an opportunity to successfully proceed with our research in otherwise extremely crowded fields of the molecular biology of mTOR and mTOR-related disorders.

An important part of our work during the last 6 years has been to develop and characterize new approaches to study mTOR functions in vivo beyond dendritogenesis (i.e., in utero brain electroporation in rodents and transgenic zebrafish) and in clinically relevant material (e.g., patient samples, primary cultures, induced pluripotent stem cells, and organoids). These modern techniques, together with newly identified mTOR-controlled molecular processes, are critically important for our second main objective, namely understanding the molecular pathology of mTORopathies (Main Research Objective 2), which are diseases that are related to mTOR dysregulation (e.g., tuberous sclerosis complex (TSC) and epilepsy).

By studying mTOR in the context of the control of dendritic arbor morphology, we identified a significant gap in the literature about this phenomenon. Dendritic arbor morphology is unique for different types of neurons and reflects their precise adjustment to functions they perform within particular neuronal networks. Although dendrites must remain intact for more than 80% of a neuron’s lifespan, little is known about the molecular mechanisms that underlie this phenomenon. To date, very few proteins have been identified to be essential for the stability of mature dendritic arbors. Disturbances in dendritic arbor stability in the mature brain are related to prolonged stress and mood disorders (e.g., depression). At later stages of brain aging, when cognitive decline develops, dendrites may also deteriorate. Intriguingly, recent studies reported changes in mTOR signaling in mood disorders and aging. Thus, our new Main Research Objective 3 seeks to understand the molecular mechanisms of dendrite stability and their disruption in mood disorders and the aging brain.

Our major success in 2019 falls within Main Research Objective 2, which focuses on mTORrelated disorders. One such disease is TSC. It is a multiorgan disease that is caused by mutations of the TSC1 and TSC2 genes, the products of which form a complex (TSC complex) that inhibits mTORC1 (Switon et al., IUBMB Life, 2016). The most common symptoms of TSC are epilepsy, autism, the formation of benign tumors in the brain, and socalled TSC-associated neuropsychiatric disorders (TANDs). We used zebrafish with the mutated Tsc2 gene to study causal links between elementary neurodevelopment and epilepsy/TANDs. We found that the lack of Tsc2 in zebrafish resulted in heterotopias (Fig. 1A) and hyperactivation of the mTorC1 pathway in pallial regions, which are homologous to the mammalian cortex (Kedra et al., Proc Natl Acad Sci USA, 2020). We observed commissural thinning (Fig. 1B) that was responsible for brain dysconnectivity, recapitulating TSC pathology in humans (Kedra et al., Proc Natl Acad Sci USA, 2020). The mutants exhibited epileptogenesis that resulted in nonmotor seizures and an increase in anxiety-like behavior (i.e., one symptom of TANDs; Kedra et al., 2020; Fig. 1C,D), which were rescued by reducing tyrosine receptor kinase B (TrkB) signaling. TrkB inhibition also rescued brain dysconnectivity. These data provide a mechanistic link between brain anatomy and human TANDs and identify TrkB as a possible lead target in the search for TAND-specific drugs. 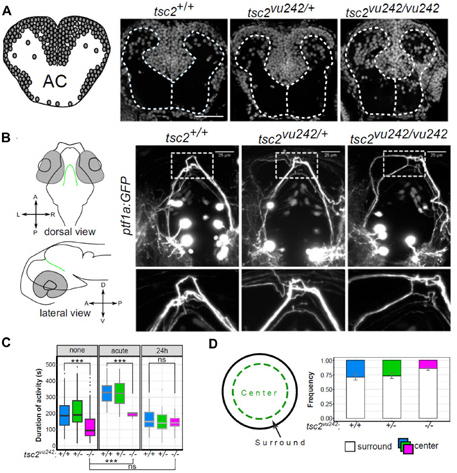 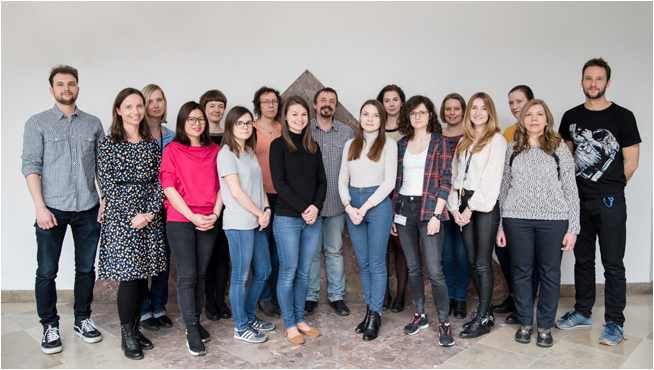 Role of dynein-dynactin complex, kinesins, motor adaptors and their phosphorylation in dendritogenesis.

Phosphoproteomic insights into processes influenced by the kinase-like protein DIA1/C3orf58.

c-Fos and neuronal plasticity: the aftermath of Kaczmarek's theory.

The level of microRNA 21 is upregulated by rapamycin in serum of tuberous sclerosis complex patients and subependymal giant cell astrocytoma (SEGA)-derived cell cultures.

GSK3α and GSK3β Phosphorylate Arc and Regulate its Degradation

Expression of microRNAs miR21, miR146a, and miR155 in tuberous sclerosis complex cortical tubers and their regulation in human astrocytes and SEGA-derived cell cultures

Beyond control of protein translation: What we have learned about the non-canonical regulation and function of mammalian target of rapamycin (mTOR)

CYR61, a matricellular protein, is needed for dendritic arborization of hippocampal neurons

Adhesion, but not a specific cadherin code, is indispensable for ES cell and induced pluripotency

Why do we need induced pluripotent stem cells in neurobiology?

Developmental plasticity of the dendritic compartment: focus on the cytoskeleton

2'-O-ribose methylation of cap2 in human: function and evolution in a horizontally mobile family

Expression of Ttyh1, a member of the Tweety family in neurons in vitro and in vivo and its potential role in brain pathology.

Production and characterization of recombinant protein preparations of Endonuclease G-homologs from yeast, C. elegans and humans.

The dissection of transcriptional modules regulated by various drugs of abuse in the mouse striatum.

Role of mTOR in physiology and pathology of the nervous system

Beta-dystroglycan as a target for MMP-9, in response to enhanced neuronal activity.

ARF6 in the nervous system.

The growing role of mTOR in neuronal development and plasticity