RNase H2 cleaves the 5′ phosphate of ribonucleotides in RNA-DNA junctions. It is the only known enzyme that can initiate the process of mutation-free removal of single ribonucleotides from genomic DNA. Such ribonucleotides are very often misincorporated by replicative polymerases and lead to genomic instability.

The studies of RNases H2 were performed in collaboration with Dr. Robert Crouch (National Institutes of Health, USA).

Crystal structure of T. maritima RNase H2 in complex with the nucleic acid substrate. The catalytic domain is in orange and purple and the helical C-terminal extension in yellow. DNA is shown in blue and single ribonucleotide in red. Metal ions at the active site are shown as green spheres. Crystal structure of human RNase H2. The catalytic subunit is shown in yellow and the auxiliary ones in purple in blue.

RNases H3 are present in certain bacterial and archaeal species. They share high sequence and structure similarity with RNases H2, however in terms of biochemical properties they are similar to RNases H1 – they prefer to cleave RNA/DNA hybrids in the middle of the RNA sequence. RNase H3 contains a unique N-terminal domain related to TATA-binding protein. Crystal structure of RNase H3 (catalytic domain in yellow and N-domain in green) interacting with an RNA/DNA hybrid (RNA in red and DNA in blue). The cleaved phosphate is shown as a red sphere and the phosphate group of the deformed DNA residue as a blue sphere.

Nucleotide excision repair (NER) is one of the major pathways of DNA repair and its main feature is its ability to recognize a wide spectrum of DNA lesions of various sizes and structures. In bacterial NER UvrA, a dimeric ATPase, plays the role of a DNA damage sensor. Damage verification is performed by UvrB helicase and UvrC double nuclease excises the damaged DNA fragment. Crystal structure of UvrA dimer (one monomer in color, the other in gray). One ATPase module is shown in cyan and red and the other in pink and blue. The DNA-binding domain is in green and UvrB-binding domain in yellow. Structural zinc ions are shown as orange spheres.

The studies of damage verification in bacterial NER have been performed in collaboration with Janusz M. Bujnicki (IIMCB) and Alessandro Costa (The Crick Institute).

Model of damage verification in bacterial NER. (A) Model of UvrA2—UvrB2—DNA complex. UvrA dimer shown in two shades of blue. UvrB shown in orange. DNA shown in black. (B) Proposed mechanism. The UvrA dimer bound at the site of DNA modification recruits two UvrB molecules. Each UvrB molecule clamps a different DNA strand under the B-hairpin element (upper panel). Both UvrB molecules then translocate toward the lesion with 5′ to 3′ polarity on the strand under the hairpin. The UvrB molecule that clamps the modified strand will stall at the lesion (green star indicates the site of DNA modification) and the other UvrB molecule (light orange) will dissociate (middle panel). The stalled UvrB recruits UvrC double nuclease (shown in yellow), which makes two incisions indicated with triangles.

Eukaryotic nucleotide excision repair (NER) is one of the major DNA repair pathways. It involves the excision of the DNA fragment containing the damage. This is achieved through the action of two nucleases – XPF-ERCC1 complex and XPG (Rad2 in yeast). Rad2/XPG belongs to flap endonuclease metal ion-dependent enzymes along with FLAP1 and EXO1. Its unique feature within this family is the ability to cleave DNA bubbles – substrates with melted single stranded region flanked with double-stranded stretches of DNA. Crystal structure of Rad2-DNA complex. The complex contains two independent protein molecules – one is shown in color: cyan for H2TH motif, green for hydrophobic wedge and orange for helical arch. The DNA is shown in cyan and blue, potassium ion as a purple sphere and the calcium ion at the active site as a green sphere.

RuvC is a canonical bacterial Holliday junction (HJ) resolvase, which functions as a dimer. HJ are four-way DNA structures formed by the exchnage of strands between two helices. They are intermediates in homologous recombination, a process which is used to repair dangerous DNA lesions such as double-strand breaks. Crystal structure of RuvC in complex with Holliday junction. The two protomers are shown in pink and orange. The DNA is in blue with cleaved phosphates indicated with spheres.

Studies of RuvC mechanism have been done in collaboration with Jiří Šponer (Institute of Biophysics, CAS) Cartoon representation of the mechanism of HJ resolution by RuvC. (a) Holliday junction. Cleaved and non-cleaved DNA strands are shown in purple and blue ladder-like representations, respectively. (b) Binding of the HJ DNA. The subunits of the dimer are shown as yellow-green and pink ovals. The scissile phosphate is marked as a purple circle. Cyan circles show active sites in an inactive configuration. (c) Flipping of the adenine (red) opposite the scissile base. The active site in the catalytic configuration is shown as a red circle. (d) The second cut. (e) Resolution products

Slx1 is a nuclease which cleaves various DNA structures during DNA repair and recombination. It associates with Slx4 platform protein which coordinates the action of multiple proteins. Slx1 together with Mus8-Eme1 nuclease constitute one of the major Holliday junction pathways in eukaryotes. Crystal structures of Slx1 homodimer and Slx1 in complex with Slx4CCD domain (orange). Slx1 comprises GIY-IYG nuclease domain (yellow) and RING finger zinc-binding domain (green). Upon Slx4 binding the active site of the nuclease domain is exposed and the enzyme is activated. Reverse transcriptases use two enzymatic activities – DNA polymerase and RNase H to catalyze the conversion of single-stranded RNA to double-stranded DNA, a process essential for proliferation of retroviruses such as HIV and retrotransposons. Retroviral RTs are divided into two classes – dimeric (i. e. HIV) or monomeric (i. e. gammaretroviral enzyme from mouse Moloney leukemia virus and closely related XMRV). Retrotransposons are mobile genetic elements that replicate with an RNA intermediate. Reverse activity of element-encoded RT is essential for this process. Retroelements are one of the most potent forces shaping eukaryotic genomes – more than 40% of human genome derives from those elements. Ty3 is a yeast retrolement from long-terminal class termed Ty3/Copia. It is thought that retroviruses evolved from this class of retrotransposons. Crystal structure of Ty3 reverse transcriptase. The subunit with polymerase-competent configuration is shown in darker color (blue-fingers, red-palm, green-thumb, yellow-RNase H) and the subunit with altered conformation in lighter shades of the same colors. RNA template stand is in purple and DNA primer strand in blue. Active site residues for polymerase and RNase H domain are shown as sticks.

HIV-1 RT is an important drug target in therapy of HIV-1 infection. The RT uses its polymerase and RNase H activities to catalyze the process of reverse transcription, in which the single-stranded RNA of the virus is converted into double-stranded DNA that can be integrated into the host cell genome.

Molecular dynamics simulation of HIV-1 RT RNA/DNA complex (two views). Superposition of the starting model (light colors) and the final model in MD simulations (dark colors). Domains of HIV-1 RT are labeled. RNA and DNA strands of the substrate are shown in red and blue, respectively.

In order to be integrated into the host cell genome, the single-stranded RNA of HIV-1 is converted into double-stranded DNA. The synthesis of the (+)-strand DNA starts from the polypurine tract (PPT) primer. The PPT primer is generated by the RNase H domain of HIV-1 RT which cuts specifically at its termini, but leaves the body of the PPT intact.

Studies of HIV-1 RT have been done in collaboration with Jiří Šponer (Institute of Biophysics, CAS) and Taekjip Ha (Johns Hopkins Univ.).

Model of PPT recognition by HIV-1 RT. Cleavage at the expected site involves both preferred residues at the cleavage consensus position and the ability of PPT sequence to undergo the appropriate conformational change without distortion (left panel). Cleavage in the middle of the PPT body (A-tract) is inhibited by three elements: non-preferred residues in the consensus positions, rigidity of the poly(rA-dT) sequence, and misalignment of the substrate at the RNAse H active site due to poly(rA-dT) sequence slippage (right panel).

mRNA contains a cap structure on its 5' terminus. In higher eukaryotes the first and the second ribonucleotide of the body of the mRNA are methylated on the 2' oxygen. This is thought to serve as a tag to distinguish self mRNA from the mRNA of invading viruses. To circumvent the mechanism, some viruses such as West Nile and yellow fever viruses encode their own 2'-OH methyltransferases.

The studies of cap 2'-OH methyltransferase have been performed in collaboration with Prof. Janusz M.Bujnicki (IIMCB). 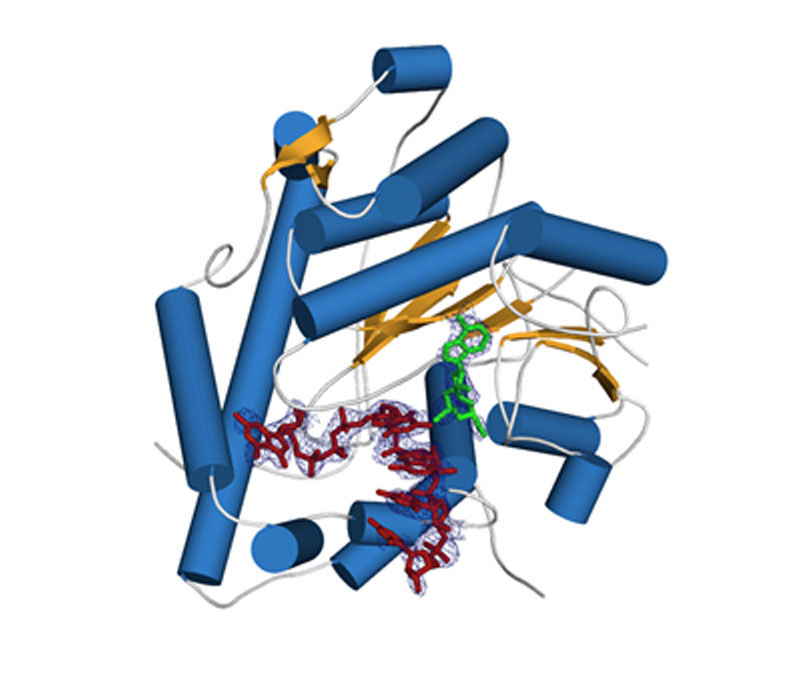 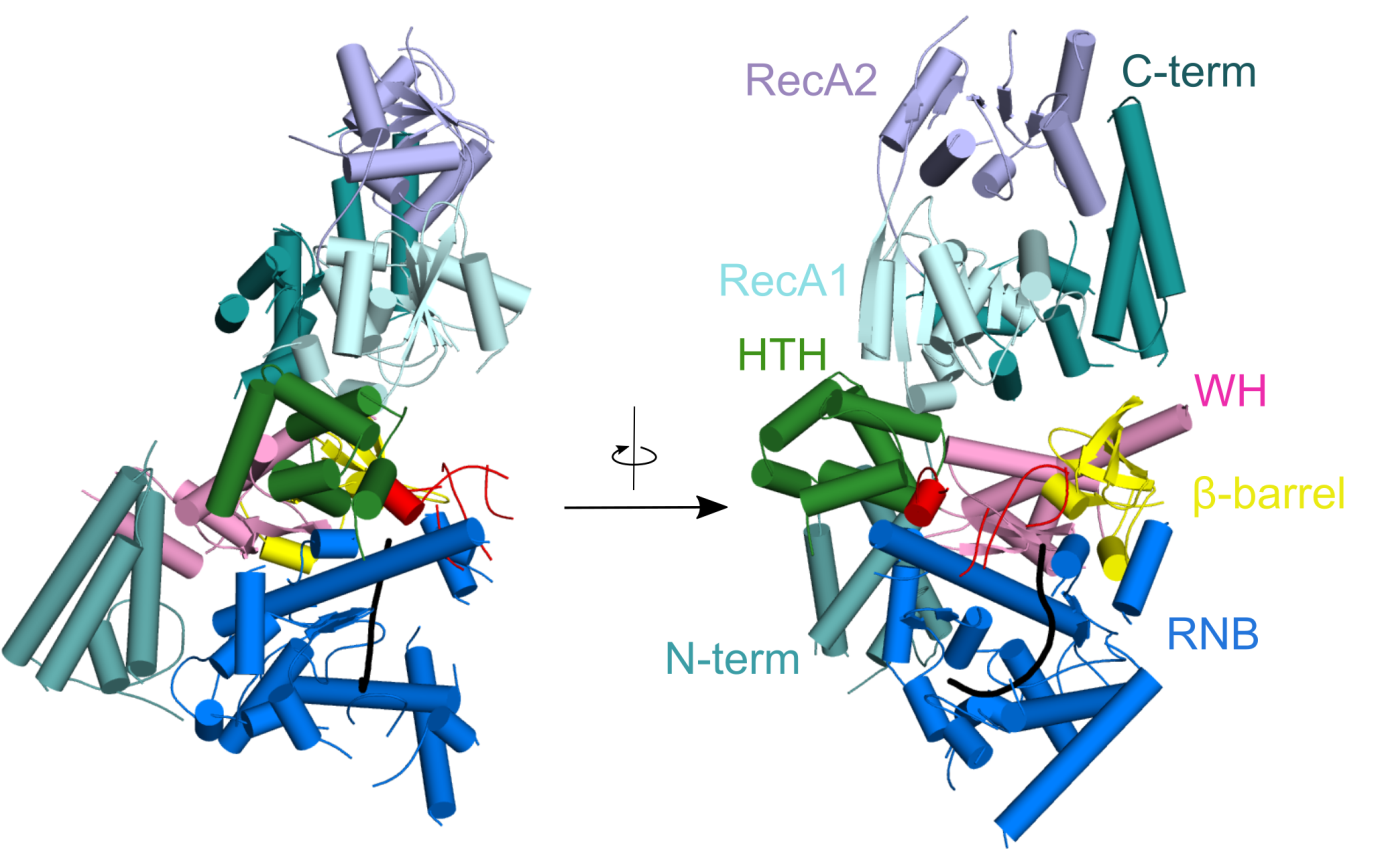 Crystal structure of Candida glabrata mtEXO complex shows the arrangement of the Suv3 helicase on top of Dss1 exoribonucleases and its accessory domains decorating the catalytic RNB domain (shown in blue) with the RNA molecule trapped inside (shown in black).

Template-independent terminal ribonucleotide transferases (TENTs) catalyze the addition of nucleotide monophosphates to the 3′-end of RNA molecules regulating their fate. A subgroup TENTs are 3′ CUCU-tagging enzymes, such as CutA in Aspergillus nidulans. CutA preferentially incorporates cytosines, processively polymerizes only adenosines and does not incorporate or extend guanosines.

Antisense technology is an emerging therapeutic approach for inhibiting gene expression through recognition and RNase H1-dependent degradation of cellular mRNAs. In this technology, short, synthetic, single-stranded oligonucleotides (ASOs) are designed that are complementary to the target mRNA.

The studies of PC4-ASO complex have been performed in cooperation with Ionis Pharmaceuticals (Carlsbad, California, USA). 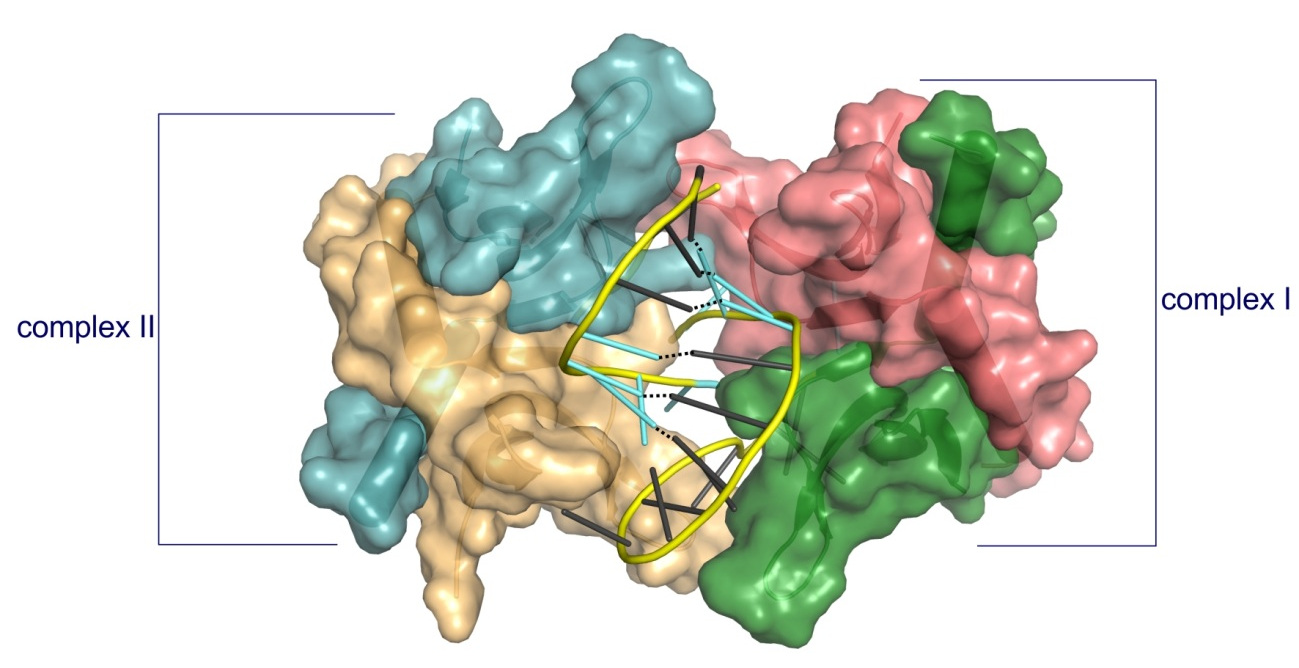 We cooperated with pharmaceutical companies in multiple drug development projects by performing structural studies of complexes of target proteins with inhibitors. Until the end of 2019 these projects were performed by a specialized laboratory – IIMCB Structural Biology Center with Marcin Nowotny as a CSO.

A published example of such cooperation concerns OATD-01 compound developed by OncoArendi Therapeutics company. OATD-01 is an inhibitor chitotriosidase/acidic mammalian chitinase which can be used in the treatment of idiopathic pulmonary fibrosis. The compound recently completed phase I clinical studies. We contributed the structural characterization of the complex between chitinase and the inhibitor. 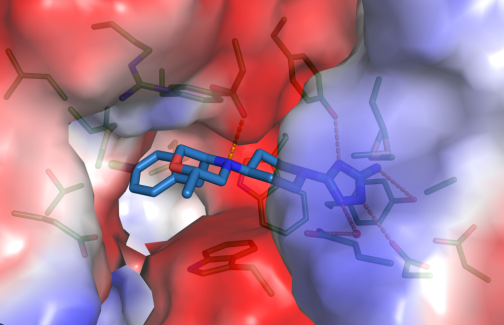 Close-up view of active site of hCHIT1 (represented as surface colored according to electrostatic potential) in complex with OATD-01 (blue sticks). 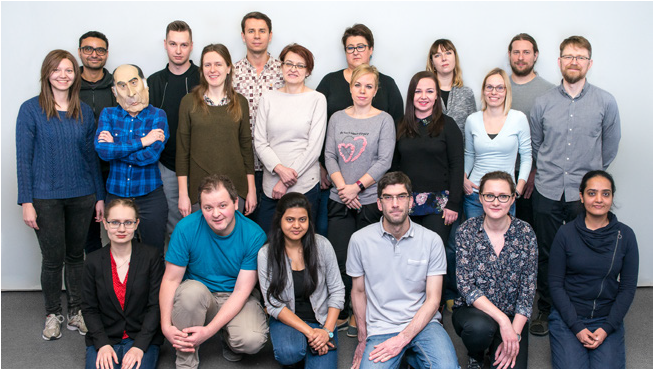 A combined structural and biochemical approach reveals translocation and stalling of UvrB on the DNA lesion as a mechanism of damage verification in bacterial nucleotide excision repair.

Origins of the increased affinity of phosphorothioate-modified therapeutic nucleic acids for proteins.

Recognition and processing of branched DNA substrates by Slx1-Slx4 nuclease.

mRNA cap analogues substituted in the tetraphosphate chain with CX2: identification of O-to-CCl2 as the first bridging modification that confers resistance to decapping without impairing translation.

mRNA cap analogues substituted in the tetraphosphate chain with CX2: identification of O-to-CCl2 as the first bridging modification that confers resistance to decapping without impairing translation.

The siRNA suppressor RTL1 is redox-regulated through glutathionylation of a conserved cysteine in the double-stranded-RNA-binding domain.

Structure and mechanism of nucleases regulated by SLX4

Structural and Mechanistic Analysis of the Slx1-Slx4 Endonuclease

Helicobacter pylori HP0377, a member of the Dsb family, is an untypical multifunctional CcmG that cooperates with dimeric thioldisulfide oxidase HP0231

Structural and biochemical insights to the role of the CCR4-NOT complex and DDX6 ATPase in microRNA repression.

Crystal structure of the catalytic core of Rad2: insights into the mechanism of substrate binding

Crystal structures of RNase H2 in complex with nucleic acid reveal the mechanism of RNA-DNA junction recognition and cleavage.

Human Sgt1 binds HSP90 through the CHORD-Sgt1 domain and not the tetratricopeptide repeat domain.

Ca2+-dependent translocation of the calcyclin-binding protein in neurons and neuroblastoma NB-2a cells.

Characterization of the interaction of calcyclin (S100A6) and calcyclin-binding protein.