Intricate embryonic patterning is achieved through highly precise regulatory mechanisms that ensure controlled expression of genes at the correct time and space. Our research seeks to understand the mechanism of gene regulation during embryonic development in vivo using zebrafish (Danio rerio) as a model organism. We investigate gene regulation at two different levels: transcriptional and posttranscriptional.

At the level of transcriptional regulation, we seek to understand the mechanism by which transcription factors (TFs) and the epigenetic landscape interact to regulate the development of complex embryonic patterns and structures. We also seek to understand how the disruption of this regulation results in congenital malformations, which would ultimately provide critical insight into human diseases. We posed our questions within the context of heart development because of the importance of this organ for life and its relatively well studied morphology, physiology, and development. Key factors regulating the development and functioning of the heart have been established. However, still unknown are precisely how these factors are regulated, how they interact with each other and with epigenetic factors, and how the regulatory landscape dynamically changes throughout development in order to orchestrate different phases of organogenesis. Understanding such regulation would contribute to the identification of nongenic risk factors and elucidation of the complex pathophysiology of congenital heart defects.

To gain a comprehensive view of the gene regulatory network in heart development, we investigate two distinct cell types of the heart: cardiomyocytes (CMs) and cardiac pacemaker cells. These two cell types originate from the same progenitor population but are set apart early in the course of heart development through induction of the expression of distinct TFs, resulting in their different properties. Parallel studies in these two cell types will provide an additional interesting dimension of differential gene regulation in the context of cell type specification. 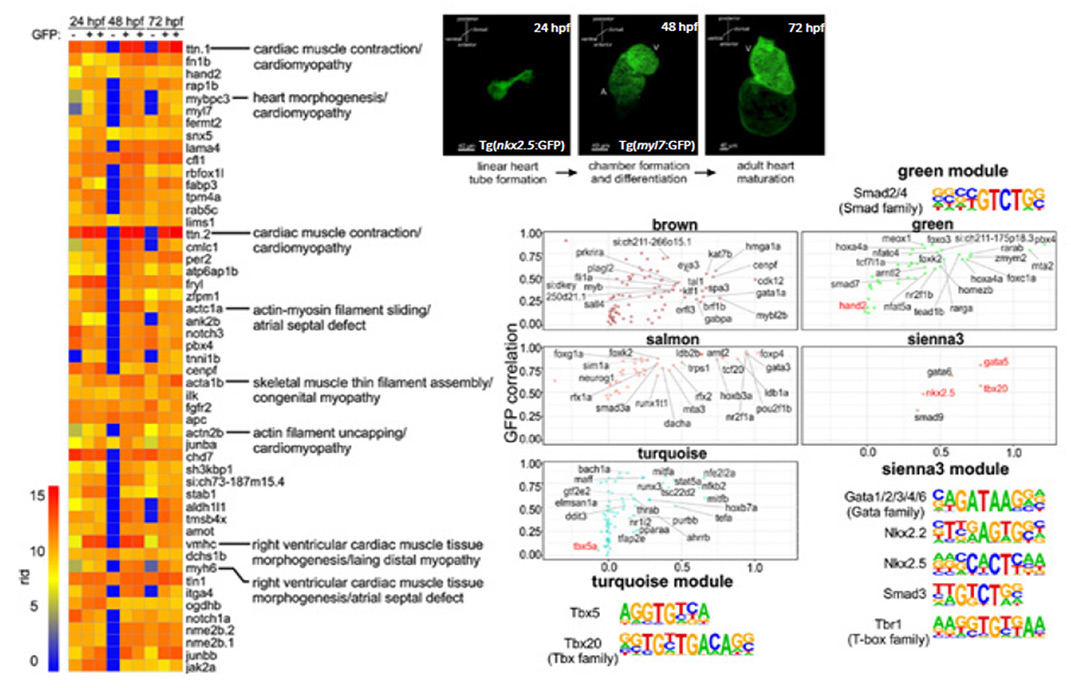 At the core of the machinery that regulates each step of heart morphogenesis are cardiac TFs, including Nkx2.5, Gata5, Tbx5, and Hand2. These TFs play a role in establishing the CM identity of mesodermal progenitor cells, regulating the formation and looping of the heart tube and specification of atrial and ventricular CMs. To assemble the molecular interaction network between factors that are involved in heart development and disease, we applied various computational and mathematical modeling strategies. These include in silico TF footprinting analysis of ATAC-seq data and Boolean modeling of the cardiac transcriptional regulatory network based on genomic and epigenomic data. Such modeling-based approaches will enable us to better define and characterize principles of molecular interactions and project these principles to predicting the outcomes of genetic perturbations. This provides a system where we can test a large number of possible scenarios and ultimately build a biologically relevant genetic regulatory network based on our genomics experiments. Such an approach will potentially refute many unnecessary or implausible hypotheses, thus saving time and resources by addressing specific questions and pinpointing crucial links or correlations in the system for targeted validation. Ultimately, we seek to characterize the contribution of the dynamic transcriptional regulatory landscape to heart development and identify novel elements (both genic and nongenic) that are associated with heart defects.

The cardiac conduction system is responsible for generating and propagating electrical impulses that are required for the contraction of heart muscle tissues. The cardiac conduction system consists of pacemaker cells, specialized heart muscle cells that ensure rhythmic contractions of the heart. Pacemaker cells possess distinctive morphological and electrophysiological properties that are specialized for their function. They are set apart early from CMs in the course of heart development through induction of the expression of core TFs, such as Tbx2, Tbx3, Tbx18, and Isl1, which prevents their differentiation into CMs. Once specified, pacemaker progenitor cells further develop low-conductance properties through the expression of gap junction proteins that are distinct from CMs. Despite the knowledge of key genetic factors that are required for pacemaker cell specification, the molecular mechanisms that regulate their development are still insufficiently understood. Important questions remain unanswered with regard to the ways in which the underlying molecular mechanism translates into the proper functioning of pacemaker cells and the consequences of their dysregulation. Moreover, inherited forms of arrhythmia are often associated with more common forms of congenital heart malformations that affect other tissue types of the heart, including CMs, implying the interconnectivity of gene regulatory networks that govern their development and function.

The zebrafish heart exhibits remarkable similarities to the human heart in terms of basal heart rate, electrophysiological properties, and action potential shape and duration. Thus, it is an ideal model organism to study the heart pacemaker and model human clinical conditions that affect pacemaker function. Importantly, zebrafish have the potential to allow large-scale pharmaceutical screening to discover new therapies for heart disease, particularly those that affect the pacemaker. In collaboration with Vladimir Korzh (IIMCB), we utilized the transgenic lines ET33mi59B, ET33mi28, and ET31, which express green fluorescent protein in subpopulations of pacemaker cells, to characterize the morphology of the zebrafish pacemaker and isolate pacemaker cells for further genomic analyses to elucidate gene regulatory networks in pacemaker development. Transcriptome profiling of isolated pacemaker cells revealed the expression of genes that define the Sinoatrial and Atrioventricular nodes, including isl1, tbx2a, tbx2b, tbx3a, and hcn4. However, in addition to these genes, we also identified genes that are normally expressed in the working myocardium, epicardium, and endocardium. These observations reflect the heterogeneity of cell types that comprise the pacemaker region, thus posing additional challenges to data interpretation. We are currently focusing our analyses at the single cell level through the application of a Drop-seq-based method to characterize the diversity of cell types that constitute the pacemaker and assign molecular identities to each specific cell population. The cells of the pacemaker and their subtypes represent populations of rare cell types that are challenging to isolate and study. Therefore, in addition to providing key information that is necessary for the meaningful interpretation of our transcriptomics data, a detailed knowledge of the distinct cell types that constitute the pacemaker and a thorough understanding of their nature is an essential step to understand their role in heart development and function. Ultimately, we aim to establish zebrafish as a model of pacemaker dysfunction, identify novel genetic elements that are involved in pacemaker-related human diseases, and generate new mutant lines for functional studies of these factors.

Developmental control through the post-transcriptional regulation of maternal mRNA expression

During embryogenesis, a silent transcriptional period exists from the moment of fertilization to the time of zygotic genome activation, known as the mid-blastula transition (MBT) in zebrafish and frogs. During this period of transcriptional silence, development is regulated by maternally deposited mRNAs that undergo various forms of posttranscriptional modifications to regulate their expression.

I. Translational control by cytoplasmic polyadenylation.

RNA editing refers to the post-transcriptional modification of RNA sequences, the most common form of which is A-to-I conversion that occurs through the deamination of adenosine (A) at the C6 position, converting it to an inosine (I). In humans, the misregulation of A-to-I RNA editing in somatic tissues can lead to neurological and metabolic disorders, autoimmune diseases, and cancer. A mode of post-transcriptional gene regulation, such as RNA modification, would nicely fit into the scenario that occurs at the earliest stages of embryonic development, during which the embryo contains an abundant supply of maternal mRNAs and zygotic transcription is still absent. Surprisingly, RNA editing has been seldom considered in the context of embryonic development. In collaboration with the Bochtler laboratory (IIMCB), we aim to elucidate the biological function of A-to-I RNA editing in early embryonic development using zebrafish as a model organism. 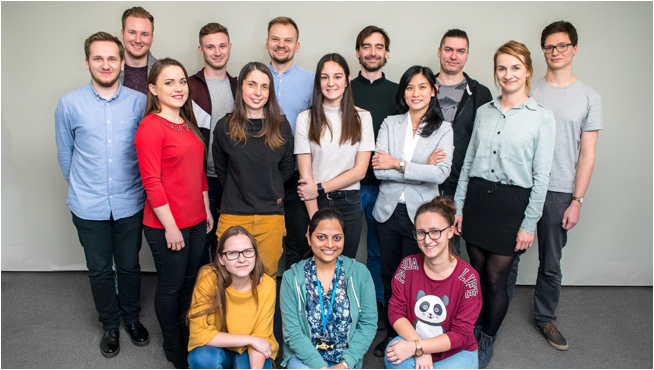 Fish-Ing for Enhancers in the Heart.

The development of zebrafish pancreas affected by deficiency of Hedgehog signaling.

Transcriptome profile of the sinoatrial ring reveals conserved and novel genetic programs of the zebrafish pacemaker.

MasterOfPores: A Workflow for the Analysis of Oxford Nanopore Direct RNA Sequencing Datasets

MetaPhOrs 2.0: Integrative, Phylogeny-Based Inference of Orthology and Paralogy Across the Tree of Life.

The zebrafish as a model for developmental and biomedical research in Poland and beyond.

Decoding the Heart through Next Generation Sequencing Approaches.

The translational regulation of maternal mRNAs in time and space.

The canonical way to make a heart: β-catenin and plakoglobin in heart development and remodeling

DANIO-CODE: Toward an Encyclopedia of DNA Elements in Zebrafish